Do Russians have a right for euthanasia? 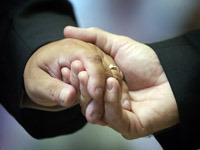 Death is not the worst thing that can happen to a human being, Plato used to say. What can one do about a loved one who suffers from terrible pains and wants to die? Vyacheslav Demin, a 72-year-old man, a resident of Petrozavodsk, strangled his wife, but it was the last thing that the woman asked her husband to do for her. The court took this detail into consideration - the man was sentenced to four years in a tight security colony.

The Demins were a common family couple. As they were aging, the spouses began to suffer from serious illnesses. Vyacheslav's wife was suffering from memory loss - she would often forget where she was and what she was doing there. Last autumn, the woman broke her hip. Doctors did not keep the woman at hospital for a long time, but asked the ailing man to take care of his ailing wife instead.

"She was asking for death, many times," the man said.

The man could not remember the moment of murder. When he woke up he realized that he had strangled his wife with a shoe lace. He called the police himself and confessed his guilt.

The court took these circumstances into consideration and sentenced the man to four years instead of six. The finale of this story - four years in a tight security colony - leaves a strange impression. Formally, the court sentenced a murderer to a term in prison. However, is the man guilty of what he has done?

Vyacheslav Demin's wife broke her femoral neck, but was discharged from hospital in only one week. Doctors said during the trial that such bones do not grow back together at such an age so there is absolutely no use in keeping such patients at hospitals. Mr. Demin's wife was 70. For some reason, a person aged over 60 is considered an absolutely helpless individual in Russia. As a rule, the patients with femoral neck fractures usually die within one year just because they do not receive due care.

It just so happens that the doctors are not guilty of the woman's death. The relatives of the elderly spouses are not guilty either: their only son died 15 years ago. The couple had a granddaughter and nieces, but they did not have any time to take care of the ailing elderly people. Social services are not guilty either. Vyacheslav Demin said that he did not want to accommodate his wife in a nursing home, because he would have to give away his apartment for it. The man was never offered any other assistance. It appears that there is only one person guilty of the woman's death - her own husband, who could no longer see his wife suffering and who could no longer ignore her requests to help her die.

The issue about legalizing euthanasia still received public attention in the Western society nowadays. The word 'euthanasia' was invented by English philosopher Francis Bacon from two Greek words - 'eu' that means 'good' and 'thanatos' that means 'death'. The problem received global attention during the 1990s owing to US doctor Jack Kevorkian, who later became known as Dr. Death. Kevorkian made lethal injections to 130 of his patients upon their agreement, in an attempt to help them pass away. Kevorkian died his own death in the beginning of June at age 83.

English novelist Terry Pratchett continues the propaganda of euthanasia. The BBC has recently aired his documentary "Choosing To Die" about the voluntary death of his friend, Peter Smedley, a British millionaire. Peter knew that he was destined to die a terrible death from an incurable disease. To avoid such an end of his life, Smedley went to a clinic in Switzerland that offered painless and quiet death to its patients. Pratchett himself also plans to go to the same clinic with the same goal - he was diagnosed with Alzheimer's several years ago.

Nowadays, euthanasia is legally allowed in Switzerland, Belgium, Luxembourg, the Netherlands, Germany and two states of the USA - Washington and Oregon. In Switzerland, there is even a special term for this - 'death tourism'. Up to 200 foreign nationals come to the country every year seeking nothing but their own death. The Swiss government tried to regulate the inflow of such tourists in May of this year, but local citizens did not support the initiative. Eighty-five percent of Swiss citizens voted for equal right for euthanasia for everyone.

Other countries prefer not to make any certain decisions on the matter yet, although the number of supporters of euthanasia in Europe continues to grow. One can only imagine how this issue could be discussed in Russia. The adversaries of euthanasia have weighty arguments, but no one has ever canceled the freedom of person's will. Doesn't this stipulate freedom of voluntary death in certain situations?