Vatican concerned about monks, not sex 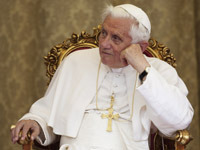 The Vatican has mobilized its forces to combat sexual abuse among Catholic clergy. A congress on this issue is scheduled for February, and other events are being organized. However, a recent study reported an incorrect understanding of this issue by the public. Catholics continue to defend celibacy. Last Saturday a press conference on the upcoming event was held in Pontifical Gregorian University on the initiative of the Pope.

Before that, the prefect of the Congregation, Cardinal William Levada, sent a directive to all bishops' conferences around the world where he called upon creating a document listing measures required to overcome the crisis. The Cardinal also encouraged the bishops to cooperate with civilian authorities in addressing sexual crimes of the clergy. It turns out that the Vatican plans to create a multilingual educational online resource where Catholic clergy around the world can learn how to protect children from violence.

The site will also contain information for the victims of sexual abuse. The issue of sexual abuse among the clergy will be also discussed at the next plenary assembly of bishops scheduled for June.

It will discuss the amendments to the "Law on Protection of Children and Youth" adopted in 2002 after a large scandal that broke out in Dallas. The bishops will have to amend the document based on the experience gained over the years of struggle with sexual abuse. In addition, in February of 2012 the Vatican plans to hold an international conference of experts on sex crimes at the Pontifical Gregorian University.

The Congress "On the road to recovery and renewal" intends to help the church authorities to develop a system of guidelines for dealing with such crimes and their avoidance. The Vatican also directed bishops around the world to develop a comprehensive guide on combating sexual harassment by next year. American Organization of survivors of the clergy condemned the move, because it provides no sanctions for bishops who violate their own rules. A famous British psychiatrist Sheila Hollins, according to "The Voice of America," ​​plans to speak at the upcoming conference and talk about her experiences as a participant in therapeutic programs for the victims of sexual violence in Ireland and the UK. Hollins pointed out that many victims believe that there is the lack of attention to their problems, and therefore the church should allow them to speak up. Only a month ago, researchers in New York John Jay College of Criminal Justice published a study that was presented to the members of the American Episcopal conference in Washington.

As reported by "Vatican Radio," there is a common public misconception that the problem of sexual abuse within the Church is still relevant. However, the data collected by the researchers of the Institute indicates that a surge of sexual abuse reached its peak in the mid-1960s through mid-1980s, while approximately 94 percent of cases have been declared prior to 1990s. The report stressed that the church authorities at the time underestimated the scale of this phenomenon and did not respond appropriately to allegations of the victims. The study says that almost all the priests who commit sexual assault do not have mental disorders. Only 5% of all defendants are pedophiles, i.e., those who had sexual intercourse with children of 10-12 years old. Most of the cases are the so-called ephebophiles, or people who abuse those aged 15 to 19.

It is believed that pedophilia of priests is closely related to their homosexuality. Further the report provided startling conclusions. It turns out that despite the fact that most victims of abuse are boys, clinical data do not confirm that homosexual priests are more prone to sexual abuse than clergy of traditional orientation. The researchers also reject the link between pedophilia and celibacy of the clergy. Scientist do not know why celibacy, practiced for centuries in the Catholic Church, just over 20 years in the twentieth century has reached its peak and begun to decline in 1985. Vasily Rozanov lamented in the beginning of the last century that marriage and family in Europe were completely spoiled, and would not flourish until Europe stops flourishing. He said the flower of Europe was black, and a white rose would only grow on its grave.

Arguing about the metaphysics of Christianity (the main religion of Europe), Russian writer and philosopher did not find the answers to a number of very valid questions about the relation of Christianity and sex but posed some more. While there was no discussion of sexual abuse among clergy in his works (in his time it was not a topic of public debates), the entire pathos of Rozanov is on the degeneration of Christianity seeking their roots in the monastic life, in the original degeneration. Around the same time the critique of Christian decadence was emanated by Friedrich Nietzsche. The later was a representative of European criticism, and the evidence that it was time to look again at the Christian religion in general, not just its individual parts: Catholicism, Orthodoxy and Protestantism.

Libidinous monks have been known at least since the Renaissance, not only in classical literature and medieval fabliau. The phenomenon does not have to do with the notorious celibacy brought up by Pope Benedict 16th. For the majority of people it is an outdated principle, justified historically, but no longer needed. Yet, not all monks dream of its abolition. However, the triumph of the principle of monasticism in Christianity noted by Rozanov, and living in a same-sex private institution, as practice shows, are important elements for the existence of such misfortunes in the lives of some young people.