What women want in bed? 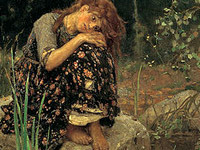 What is really important for women in bed? Not only men but also scientists have been looking for an answer to this question. There is a multitude of different opinions from both sexes. The authors of a new book, famous American neuroscientists, argue that the mechanism of the sexual desire in women and men differs greatly.

In a recent U.S. book called A Billion Wicked Thoughts, famous scientists, neuroscientists Ogi Ogas and Sai Gaddam argue that the female brain is much more complex than that of a male when it comes to the choice of a sexual partner. For their findings, they used statistical data from billions of queries related to sex from Dogpile search engine that combines search results from Google, Yahoo! and Bing, their own experience in sexuality and psychology, as well as the latest scientific evidence about differences in brain activity in men and women.

Everyone has an alarm system linked to specific parts of the brain which analyzes them and gives a command to respond. Sexual signaling system of men is mostly visual, therefore men get pleasure at the sight of a woman's orgasm, which many women are well aware of and therefore, fake it. Women's brain works as a "detective agency", examining and repeatedly calculating all the qualities of a partner to determine whether the man deserves her attention. A woman wants to know whether there will be the next time, whether the man is responsible, and whether he is going to come back to her, said Ogas in an interview with CNN.

Another difference, according to scientists, is that in order for the male brain to launch sexual desire, only a visual signal is required. Women must analyze a combination of elements, and have to engage significantly more areas of the brain. It made sense from an evolutionary perspective. At the early ages a good choice of a man ensured the survival of children. The woman needed more time to make sure that he would not be cruel, unfaithful, or uncaring, that he will be able to protect her and her child. In the longer term, a picky female would always win.

The "software" embedded in the areas of the brain responsible for libido is also important. In this regard men are simple as well. Male brain is designed so that any visual or tactile image can cause excitement. This may be a certain type of shoe or foot, or a smell. Men form a set of fetishes which includes their sexual "button." Only very few women have a fetish and usually it is a story, or a romantic theme, or a movie star.

The authors provide a description to compare interests in from a chat dating site. A man wrote: cheerleaders at colleges, cheerleaders from Hawaii, beautiful girls in bikinis, tanned girls in bikinis, naked photos, Christian advice on curbing lust. A woman wrote: Orlando Bloom, vampire stories, Cinderella dresses, gossip about Orlando Bloom, Legolas and heterosexual erotica. Interests of the men here are clear, pragmatic and transparent, while a woman fantasizes about Orlando Bloom and his character from "Lord of the Rings" - Legolas.

Scientists also argue that it is nearly impossible to invent a drug to enhance female libido similar to Viagra. Female "sexual system" works independently on two levels - mental and physical. She may be ready physically, but at the same time mentally "off."

This study may lead to a very important conclusion - oddly enough, in terms of sexual interaction men are more manageable and predictable than women. After all, to turn a man on it is sufficient to push one button, whereas with women it is a completely different story. Turning a woman on may involve many factors, some of which men are not well aware of. This is why women still remain a mystery to men.