Modern children develop much faster than their parents did 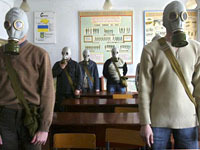 Children have become different. According to researchers, modern teenagers have become more neurotic, whereas presently-used pedagogical technologies do not meet the new requirements at all.

"The scientists, who conducted the research in 2010, reported qualitative psychological, psycho-physiological and personal changes in teenagers. When do scientists speak about changes? They don't touch upon this issue when there is a change of 10-20 percent from the norm. They speak about changes when something that is defined as a norm in science undergoes significant changes. This is a very serious subject. The changes that have been registered mean that all pedagogical technologies have to be changed," Lyubov Dukhanina, a member of the Public Chamber said.

The researchers also said that the number of gifted children was growing steadily in Russia. Pedagogues believe that only three or five percent of children can be referred to as gifted, whereas parents usually see a larger number - up to 50 percent. The authors of the research said that the quantity of children with positive deviations from the norm makes up from 30 to 40 percent.

Nowadays, children develop much faster than their parents did some 30-40 years ago. Modern children can receive tons of information very easily, which explains the phenomenon of faster development. This phenomenon is a norm today, which should not be regarded as giftedness.

It is worthy of note that Chinese teams won the International Mathematical Olympiad nine times from 2000 to 2010. Russians won the Olympiad only once - in 2007. The problem of the absence of the system to support talented children surfaced in Russia only when Russian schoolchildren began to lose one international Olympiad after another.

There are many gifted children in Russia, and children's psychologists are aware of that. However, the potential must be developed. When little children go to school, their talent gets destroyed during the first three years of studies. Those who survive the school atmosphere can be noticed and supported by someone. Those, who managed to preserve their uniqueness at school, must be talented from a standard point of view. Their talent can be noticed from standard points of view. Such outstanding scientists as Mendeleev, Einstein, Gates and many others studied poorly. If a child does not excel at school, he or she is not going to be considered gifted, and no one will be paying any attention to such children. It just so happens that the system is very good at destroying rather than finding child prodigies.

Those wunderkinds who manage to gain something in life are, as a rule, the children who were lucky to have good parents and good teachers.