Woman becomes grandmother to four illegal surrogate children at once 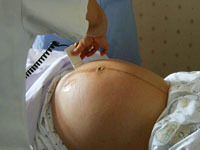 This unbelievable story has received an extensive coverage in Russia. Three years ago, an elderly Russian female Muscovite lost her son. The man died from a disease, but he had previously deposited his sperm in a sperm bank. The woman was trying to resort to the services of surrogate mothers many times, although to no avail. All of a sudden, she had four children from two surrogate mothers. They gave birth to two pairs of twins - three boys and one girl.

Lamara Kelesheva, 58, was not expecting so much happiness to come upon her out of the blue. However, it was happiness for her indeed: she became a grandmother to four healthy babies. Her son, Mikhail, 23, was diagnosed with acute leukemia in 2005.

Before starting the treatment, medics recommended the man should deposit his sperm in a sperm bank. The doctors were struggling for Mikhail's life for three years, but the man passed away at age 26.

Lamara, his mother, is a doctor of medical sciences. When she recovered from the loss of her son, she decided to find a surrogate mother to become the grandmother to Mikhail's children. Luckily, she could afford it.

Five conception attempts were made during two years after the man's death. However, all of them failed. The woman was already thinking to give up, but decided to take another chance, the last one. She used the services of two surrogate mothers at once. Very unexpectedly, both of them became pregnant.

The women gave birth to Lamara's grandchildren nearly simultaneously - on January 6th and 8th. The courageous woman became a grandmother to three grandsons and one granddaughter.

She named the girl Maria - this is the name that Mikhail wanted to give to his daughter. The boys were named Theocharis (after the grandfather), Ioanis (after John the Baptist) and Mikhail (after the father), the Komsomolskaya Pravda newspaper wrote.

The trouble started soon afterwards. A Moscow Civil Registry Office refused to register the newborns. Officials told the woman that only a family couple - husband and wife - could use the right to resort to the services of surrogate mothers. The Russian law does not stipulate the same right for a grandmother or any other relative. It just so happens that the four children do not exist legally.

The woman lodged an appeal to the Moscow Municipal Court. If the court rejects the case, Lamara will go to the Supreme Court.

Igor Shmidt, a lawyer and candidate of legal sciences, shared his point of view about the story with Pravda.Ru.

"Surrogacy is an auxiliary reproductive technology, in which a woman gives her official agreement to bear and give birth to a biologically alien child, who would subsequently be delivered to his or her genetic parents. The latter receive parental rights in spite of the fact that the child was born by a surrogate mother. The case of Lamara Kelesheva is not that unique as it may seem at first sight. As far as I know this is a third incidence, when grandmothers have children from surrogate others. However, Kelesheva became a grandmother to four children at once - this what makes this story special.

"It's also interesting that the court refused to register the infants. This is absurd. However, Russia does not have a separate law regulating auxiliary reproductive technologies yet, including surrogacy. This is what perplexes registry agencies and courts, so they refuse to register such children. There is no law to regulate this procedure in Russia, so officials simply avoid responsibility.

"However, Russian laws do not restrict parenthood obtained through surrogacy. In other words, if it's not prohibited then it's allowed. Thus, the case with the refusal to register Kelesheva's children is a mistake, which, I hope, will be solved without the need to go to the Supreme Court.

"More importantly, this story shows that such an unexpected problem can hardly be solved in Russia, although in the West it is not a problem at all. In the West, the laws regulating surrogacy have been brought to perfection. Just look at the unique case of Elton John and his homosexual partner. Their baby was registered in England without any questions.

"Yet, surrogacy is legally restricted in Germany, France, Austria and in Scandinavian countries. Surrogacy is considered unethical and inhumane towards women there. It is legally allowed in other European countries, although there is a list of special conditions which one has to observe," the lawyer concluded.