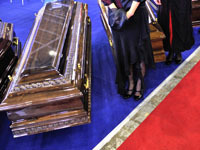 A crematorium in the Russian city of Novosibirsk decided to promote its funeral business using unusual methods. They were developed either for the advertising purposes, or in order to somehow mitigate the grief of the people who lost their loved ones. On June 1, a real celebration was held with a bunch of guests, fireworks, and refreshments.

In all honesty, in the photos the Novosibirsk crematorium looks like a royal palace. It is one of Russia's first crematoriums built with private funding, and is located in the village of Voskhod on the outskirts of Novosibirsk. An expansive park stretches in front of summer houses. The terraces of the park in front of an orange palace built in the classical style is filled with monumental sculptures.

A gardener is slowly trimming the lawn, a camel is hanging out nearby. Benches are hiding in the shade of the trees. The idyllic picture is only disturbed by tearful people in dark clothes. Looking closer, you will notice that under the trees there are pictures of people with mourning ribbons and the benches are installed in the memory of one deceased or another. Funeral idyll and ritualistic grace are felt in the air.

According to the press center of the Museum of World Funeral Culture (which, incidentally, is located immediately on the territory of the crematorium), on the evening of June 1, when Russia celebrates International Children's Day, the Novosibirsk crematorium commemorated prematurely deceased children with fireworks and laser show followed by a concert compiled of the sad songs and funeral music. The event held at sunset and ending under a starlit sky gathered nearly a thousand people.

The organizers of the event held in Russia for the first time aimed to lay the foundation of a new memorial culture in the Russian tradition of remembrance, and draw public attention to the high infant and juvenile mortality.

It was an evening of tears and blessed memories of the parents who have experienced a loss of a child. During the event the organizers managed to raise nearly 10 thousand rubles for the public funds of the Novosibirsk region helping sick children. The event in the temple of sorrow was touching, unusual and strange at the same time.

Recently the Novosibirsk crematorium began to communicate with customers through "Twitter." By means of micro-blogging the staff of the press center provides links to the funeral-related news. Last year the company organized an online funeral.

The entire ceremony, including the immersion of the coffin into the furnace, was filmed by a webcam and transmitted via a network. The organizers should not be accused of blasphemy as this event was conducted at the request of the wife of the deceased. She was abroad and could not attend the ceremony, and was only able to say goodbye to her husband via the internet.

In this scenario, a virtual funeral seems quite justified. However, at times the crematorium has ideas on the brink of a foul. Once the leaders of the temple of grief decided to hold an event timed to coincide with the Day of Defender of the Fatherland. In honor of this date they announced a free cremation for seniors and persons with disabilities. This "promotion" was valid for the entire month of February.

At the time this event provoked intense discussion on the Internet. Opinions varied. Some were outraged by the unusual proposal, while others approved of it, saying there was nothing wrong with families taking advantage of the promotion.

Crematorium managers are sometimes told that they should not be joking with death by doing PR for the ambiguous actions. However, they respond that they do not seek fame, but simply offer a modern service. They insist that they are doing everything to mitigate the grief of their customers.

In the 21 century, even cemeteries move into a sort of virtual reality. This is unusual for Russia because Russians are not yet fully accustomed to the fact that the funeral service is a business conducted according to general business rules, with advertising, public relations, managers, investors, office plankton and so on. Those in the West got used to it long ago.

Entrepreneurial Europeans have come up with many services to ensure their still living customers have at least an illusion of eternal life. Europeans are suggested to think about the way they want to go into eternity during their life. The options are ample. For example, a certain Swiss company offers to produce diamonds from the ashes of the deceased, which are then inserted into the rim of a ring or pendant. The price varies from 3.5 thousand euros for a quarter-carat diamond to 15 thousand euros for a one-carat diamond.

In Germany anonymous burials enjoy great demand. Unmarked graves in the woods are bought by those who do not want to burden their relatives with extra care. However, there are people who do not want to sink into oblivion after their death. German Matthias Kragh invented a digital cemetery for such customers. For 19 euros 90 cents a year, anyone can leave memory for posterity on their page - in the form of photographs and stories about their hobbies, etc. "Eternal" package costs 499 euros. For this money, the site promises to keep the user data until the Judgment Day.