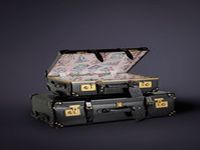 This is a novel way to rob tourists. A couple of Polish thieves found their way to Catalonia in north-east Spain where instead of finding a job and making a decent living like any normal human being, they worked a bus route to and from the airport stealing from tourists. These were no ordinary pickpockets: they used a suitcase. One of the pair, a contortionist, hid in the case, came out, robbed the unsuspecting travellers and slipped back inside unnoticed.

Until one day. The Catalonian police force bagged him. The dastardly duo worked the bus route from Northern Barcelona to the airport. Here is how they did it.

One of them carried the suitcase onto the bus with his accomplice inside, leaving it near the other bags and cases in the baggage section of the bus, where the other tourists left their belongings. During the journey, the contortionist would emerge from his suitcase, rifle through the belongings, taking money and valuables from the pile of baggage and then slip back inside again. When the bus arrived at the end of the line, the carrier would pick up the case and get off the bus, carrying his friend inside.

Nobody suspected anything and nobody had any idea how the objects could just disappear without anyone apparently getting anywhere near the baggage.

The game was up and the suspects were bagged when the carrier panicked on seeing the Catalan Special Police getting on the bus. As they entered, he left, and left his friend behind him. The police went to the baggage area and heard something. There he was sitting in his case talking on his mobile phone surrounded by his haul from that day - mobile phones, iPads, laptops, wallets, credit cards, and his working tools - cutters for padlocks.

The Polish duo, Krzysztof Grzegorz (29) and his friend Jouoastaw K. are now detained at His Majesty's pleasure - in jail, where they belong.