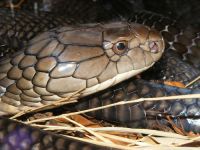 Panic broke out on a Vietnamese train last Thursday evening when deadly cobra snakes - among the most deadly known to man - were found under a seat. As hundreds of passengers ran screaming, the smuggler got away in the melee and the snakes were seized by the authorities. They were later released into the wild.

The train had stopped in the city of Quang Ngai, on the route from Ho Chi Minh city in southern Vietnam to the capital, Hanoi, in the north. As people entered the train on Thursday evening, the guard and a conductor quietly and politely checked the tickets and the passengers got ready to enjoy their ride. Suddenly, bedlam broke out.

"Snakes! Snakes!" The word soon got round the carriage and within seconds, hundreds of passengers were running screaming from the train. The alert was given by a passenger who spotted some king cobra snakes in a see-through bag under a seat. Eye witnesses described the snakes as "very big" and "terrifying".

These snakes are among the most poisonous and deadly and can kill an adult within half an hour of the bite being given. As some passengers went to look at the snakes to investigate, they reared up and started spitting. The authorities were called, but by the time they arrived, the owner had fled without his haul - worth good money in Vietnam, where these snakes are considered a delicacy. A large king cobra can sell in a Hanoi restaurant for around 500 USD. It is thought that they were destined for restaurants in Hanoi.

The police placed some green cloth over the see-through bags and carried the snakes off the train, where they were handed to the Quang Ngai Forest Protection department for release into the wild. Spokesperson Nguyen Van Han of the Forest protection department claimed that the reptiles weighed a total of 45 kilogrammes.

King cobra and cobra snakes are protected under Vietnamese law and it is forbidden to kill or trade them because they are an endangered species. Snake meat is considered to have aphrodisiac effects in Vietnam, Laos, PR China and Cambodia and is eaten by men to given them sexual potency.

The customer chooses the snake he wants to eat and it is cut open, alive, on the table. The meal starts with a drink made from the snake's still-warm blood, then the beating heart is consumed, before the meat is sliced thinly.

The consumption of snake, bear, porcupine, civet, weasel, monitor lizard and freshwater turtle is common in Vietnam, where a huge number of restaurants illegally sell these wild animals.