Are we in the presence of the fourth Reich? 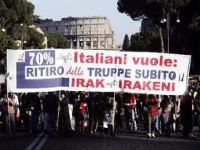 The question that directs this article may be easy to answer for the right political apologists who, of course, deny it, but also to the left who claim that fascism has not only touched our door, but it is already inside. The truth is that the world has entered a dangerous phase for the entire human species, but this is not irreversible. Commander Fidel Castro wrote in his last reflection that "as long as our species remains alive, every person has a sacred duty to be optimistic," and so, therefore, a revolutionary always takes optimism as a conviction.

In Libya, in the midst of heavy bombing by NATO on its besieged capital, Tripoli, and limited Internet connection, I found a free moment to reflect on different topics every day, a bit more theoretical, to read an interesting article published in lahaine.org Web page on 20/5/2011, written by William I. Robinson, entitled: "Global capitalism and fascism of the 21st Century." In the letter, the author comes to an interesting conclusion, analyzing some ideas and arguments with some good examples. He says: "You cannot currently qualify the U.S. regime as fascist. However, all the conditions and processes are present and being propagated."

But Robinson may evolve to another conclusion also, and that is, being more consistent with the optimism inspired by Fidel Castro, it can be said at the same time that the conditions for revolutionary possibilities in the capitalist centers of the world are being created. Large demonstrations in Spain and Greece are examples of this.

In the writing Robinson follows the idea and gives the preconditions for the resurgence of fascism in the world. Global capitalism is in crisis, and none of its theoretical apologists or economists have been able to propose solutions or exits within their own logic and structure. But he clearly avoids designating the contemporary circumstances as fascist imperialism. While the author is only a student of fascism and the politics of imperialism for being the most important center of global capital, "the mistake is failing to mention that this phenomenon has been clearly expressed for over 60 years in what is called Israel (a genocidal entity that occupies Palestine).

The idea is correct that capitalism in crisis becomes more violent. It resembles a cornered and wounded animal that attacks because of fear and the instinct for survival. The violence of capital in crisis is the act of survival. History reminds us that the emergence of fascism in Italy and Spain, with the personalities of Mussolini and Franco at the head of those States, was in large part the result of the global economic crisis of capitalism unleashed in 1929. Its twin variant, the Nazi Germany of Adolf Hitler, was also a product of that same crisis as well as the humiliating Treaty of Versailles to which Germany was subjected after its defeat in the First World War.

As we know, the capitalist crisis unleashed in those years (1929 and the 30s of the last century) was settled or paid for in the Second World War with the deaths of more than 50 million people, the destruction of all the productive forces in Europe and the reconstruction of the same in a period that lasted until the emergence of a new economic crisis in the 70's, tempered by "neoliberalism," but not settled or paid for up to today. Many thinkers and analysts understand that to conclude this new capitalist crisis would necessitate a new period of death, destruction and reconstruction of new productive forces.

Of course, there is no social policy, government style, etc. that currently exists that possesses an inspiration or proper origin, detached from reality and brought from the abstraction of some genius or schizophrenic. Mussolini, Franco and Hitler were products of the realities of their countries at a time so deadly that history remembers. They acted according to the logic of the system to save their own economies, with an iron fist and blood, combining economic models.

Although their styles of government were also very typical of these characters, the nature of the capitalist system enhances its disastrous and criminal characteristics. The solutions to the crisis of capital raised by these fascists and Nazis sought to ensure the maintenance of a social caste at the head of economic power, a relative "social welfare" only for their people (the "Aryan" race) at the expense of theft, exploitation and death of the rest of the peoples of the world.

The crisis of ideas, morals, values ​​and principles of a society are a product of the reality of the state to which the evil perverse capitalist system has degenerated, in itself, today. Violence and anti-values ​​are the nature of capital as well as segregation and racism. Exploitation of man by man are also part of its own logic that puts the interests of a class, an elite or social group, above all society and people. Workers have been transformed into objects that serve as parts of the large reproductive machinery of capital. For the capitalist, they represent simple "exchange values." When they are a hindrance, they are simply discarded or killed. Capital is the true God worshiped by the bourgeoisie.

Workers, and the people in general, are subdued by capital or are doomed to disappear. The wrath of the God of capital (in crisis) is fascism or Nazism. Thus it is understood that the crisis currently facing the global capitalist system has its impact on the political: in the ideas, antivalues and immorality that define today's imperialism. The wars and the destruction of productive forces, ethnic cleansing (in Palestine), unemployment, wage cuts, etc.., are the needs of the capitalist system today. Peace is its funeral.

William Robinson studies this idea in depth and says to us that:

"The emerging transnational capital experienced a great expansion in the eighties and nineties, implying a hyperaccumulation by means of new technologies such as computers and computing, through neoliberal policies and new forms of mobilization and exploitation of the global workforce, including a massive return of primitive accumulation, early uprooting and displacement of hundreds of millions of people, especially in the Third World, who have become internal and transnational (...) emigrants.

At the end of the nineties, the system entered a chronic crisis. The strong social polarization and increasing inequality helped create a serious crisis of excessive capital accumulation. The extreme concentration of wealth in the world in the hands of a few and the rapid impoverishment and dispossession of the majority, even forced the participants at the annual meeting of World Economic Forum in Davos to recognize that the gap between rich and poor throughout the world is "the most serious challenge in the world" and "it raises the specter of global instability and civil wars."

"Global inequalities and the impoverishment of wide majorities mean that transnational capital cannot find productive outlets to unload huge amounts of accumulated surpluses. In the 21st century, the CCT has turned to several mechanisms to support global accumulation, or profit, before this crisis."

"One is the militarized accumulation, to launch wars and interventions that produce cycles of destruction and reconstruction and generate huge profits for the military-industrial-financial-security in continuous expansion (...) A second mechanism is the assault and plundering of public budgets.

Transnational capital uses its financial power to take control of state finances and impose more austerity on the hard working majority, leading to further social inequality and deprivation. Imperialism has used its power structure to accelerate the dismantling of what remains of the conditions of wages and social benefits. And the third is the frenzied global financial speculation-converting the world economy into a gigantic casino."

And with reference to the fascism of the 21st century, Robinson further expresses that:

"A twenty-first century fascism cannot seem similar to twentieth century fascism. Among other things, there is the ability of dominant groups to control and manipulate space and exercise unprecedented control over the means of mass media and the production of symbolic images and messages. This means that repression can be more selective (as seen, for example, in Mexico or Colombia) and legally organized so that a "legal" mass incarceration takes the place in the concentration camps. Furthermore, the ability of economic power to determine election results allows 21st Century fascism to emerge without a necessary break in election cycles and constitutional order."

While William Robinson thinks that the conditions for fascism in the 21st century and are growing and shaping up, today he proves to be very careful on using that term to designate imperialism. I believe that twenty-first century fascism is a very clear fact, only expressed in a cynical form and disguised as "humanitarian" and "anti-terrorism."

On the other hand, several previous reflections on the idea have been expressed that the world capitalist crisis that erupted in the core countries has produced its first victims in the weakest link in the chain of the system, resulting in revolutionary rebellions in the capitalist periphery (Tunisia , Egypt and other Arab countries). I also said that sooner or later the popular rebellions will come to play at the very gates of the capitalist core countries.

The NATO aggression against the peoples of Libya, Syria, Afghanistan, Iraq and others, now have hope for peace. The rebellious European people have in their hands the necessary power and ability to force their governments to stop the war against those countries. 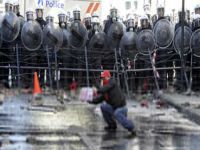 The mobilizations in Europe also open a new opportunity for political action by parties of the Left to influence and encourage popular movements proposing a revolutionary program that envisages a clear and credible exit to the crisis of capital. The fascist tendencies in the capitalist centers could be hit. Fascism today also presents a chance to either prevail in Europe again or to succumb before popular rebellions.

To extend the popular movements throughout Europe (France, Italy and UK) governments will have to concentrate theirforces internally to prevent revolutions. Here the dilemma posed by Fidel: NATO is prepared to bomb those countries for the repression that they claim other governments unleash, but now they are trapped and cornered by their own people.

The popular uprisings in Europe have begun to spread to Greece, Spain, Portugal and possibly to France and Britain, which would force their governments to turn their eyes back to within their own borders.