Venezuela getting better all the time

The social advances that no one can hide 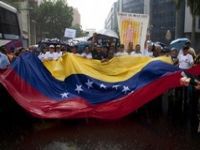 The visitor who walks the streets of cosmopolitan Caracas can soon see the Venezuelans are living in a moment of joy, marked by positive social change that is a benefit to the population.

It is because year after year, since 1999 when Hugo Chavez assumed the presidency of the country, the reasons have increased to support the transformation process chosen since the accumulated achievements are numerous.

First the missions have implemented plans to ensure medical attention, education, social inclusion and other basic rights, which served as a starting point to guarantee to reduce the wide gap between the working class and the local bourgeoisie.

As soon as these essential benefits were obtained of providing basic medical care for all Venezuelans, then teaching reading and writing to those who had never had a book in their hands and ensuring the continuity of studies took place.

The government then consolidated an offensive against poverty.

Today, as the liberator Simon Bolivar said and to paraphrase the President, the hard-working programs have a goal of giving the biggest sum possible of happiness to the people.

In this sense, the work is moving to achieve food security, ensure a decent home for every family, to incorporate workers to formal employment, increasing minimum wages and including more people in the pensioners' records, among other goals.

To reach this end, a minimum wage increase of 25 percent was recently approved as follows: from the 1st of May initially 15 percent and on September 1st it will increase to the remaining 10 percent.

This time the increase, to be enacted for 12 consecutive years, involves moving the minimum payment of 1,223 Bolivars ($279) to 1,548 Bolivars ($360), which ranks it among the highest in Latin America.

A 45 percent increase in the salary scale was also enacted for state employees and 40 percent in the wages of teachers, administrators and other employees in the university sector.

In another sector, the huge AgroVenezuela Mission House is booming and, at the same time, they are studying a program connected with the work.

Regarded as the locomotive for the fundamental two-year plan for 2011-2012 and part of the bicentennial project for the independence of this South American country (July 5), AgroVenezuela serves the farm sector to boost food security and sovereignty.

When the Mission was born last January, investment in strategic sectors was predicted, summoning the people to incorporate themselves to work in the field, increasing the area sown and national production.

In the case of yellow corn, the increase would be 50 percent (up to 1.39 million tons), for white corn the growth would be 59 percent, and rice 33 percent.

In the goal set for the Mission, of the 580,000 registered farmers, already 34,000 are producers of cereals and vegetables, organized in cooperatives, according to reports from the Minister for Agriculture and Land, Juan Carlos Loyo.

Other plans for the highest possible well-being of the people is the Great Mission House Venezuela, whose goal is to build two million homes in a seven-year period, from a fund of 30 billion Bolivars (about seven billion dollars).

The program includes several phases. The first one is a registry of families needing a roof across the nation, which began on May 7 in the states of Falcón, Miranda, Vargas, Zulia and the Capital District.

According to Rafael Ramirez, vice president for the territorial area, they have applied for 34,000 hectares of land for the construction of all planned housing complexes.

Besides funds, Mission House Venezuela requires materials, a need that is covered with the capacity of national production and through agreements signed with other governments such as Belarus, Brazil, Cuba, Russia and Turkey. The private sector also participates in the initiative.

While it guarantees home, food and adequate remuneration, the national administration is preparing a plan to further fight the struggle against unemployment and increase the percentage of people incorporated into formal employment.

The Great Mission Work, the provisional name given by the dignitary, proposes to add more than 3.5 million people into the ​​labor sector within the next eight years.

During the announcement, made during the great march for International Workers' Day, the President recalled that unemployment went from 14.6 percent in 1999, to 8.6 percent in March 2011, which represents a decrease of more than 40 percent.

Although the sectors opposed to social programs developed by the government commit themselves to refuse advancements, the figures speak for themselves.

The achievements obtained by Venezuelans in the 12 years of Chavez's direction cannot be hidden by anyone and in the same way, it is impossible to avoid seeing the results in the smiling faces of millions of children, men, women and elderly people who support the social justice advocated by the revolution.