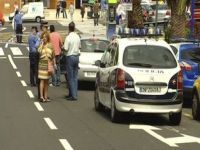 A British tourist has been beheaded in Spain. A 62-year-old British woman was shopping near Los Cristianos, Canary Isles, when a homeless Bulgarian man rushed into the centre wielding a knife, slashed the woman's throat and then set about breaking the neck, running out into the street sporting her head.

This demented maniac was wrestled to the ground by security guards, and was pinned down until police arrived just outside the Chinese Valdes shopping centre in Arona, not far from Los Cristianos, Canary Isles, where he committed the murder. It is said he ran into the shopping centre, stole a knife and committed this horrific crime. Shortly before he was caught, he threw the head aside.

It appears from eye-witness accounts that the Bulgarian did not know the victim, and just picked on the first person he found. The reaction from the local population was one of fury. A British eye-witness said they wanted to kick the maniac to death but were held back by police.

The suspect had a police record.