Many Americans seriously misled in their Christian beliefs 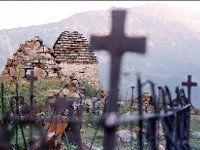 Many Americans believe that capitalism and free market economy contradict to Christian principles. A poll conducted by Public Religion Research Institute showed that such views are shared by 44 percent of respondents. Thirty-six percent of the polled disagreed with the affirmation, though. Is it really so? What is the approach of the Orthodox Church to this issue?

More than two weeks ago, Orthodox Christians celebrated the Entry of Our Lord into Jerusalem. They were reading one and the same piece from the Gospel during church services that day: "On the next day much people that were come to the feast, when they heard that Jesus was coming to Jerusalem, took branches of palm trees, and went forth to meet him, and cried, Hosanna: Blessed is the King of Israel that cometh in the name of the Lord. And Jesus, when he had found a young ass, sat thereon; as it is written. Fear not, daughter of Sion: behold, thy King cometh, sitting on an ass's colt. (John 12:12-15).

The Jews recognized Jesus of Nazareth as their King. According to the logic of political life, Jesus Christ's next step was supposed to be aimed at seizing power. However, if we read the Bible further on, we will see that the King is betrayed and executed.

We can say that such things may often happen in politics. However, Jesus agreed to be crucified. He knew who was going to betray him and when. He could have prevented all that from happening to change the course of history. However, it all ended the way it ended.

If scientists of politics and sociologists existed 2,000 years ago, they would have been racking their brains over this paradox for years. The key to understand it can be found in the following words: "My kingdom is not of this world" (John 18:36) and "The Kingdom of God is inside you" (Luke 17:21).

The Gospel is not a piece of good news about the results of a presidential vote or about a state coup. The Gospel says that human freedom does not depend on politics. Christianity is not about the science of building state life in which everyone would have everything. Christianity teaches how to live on Earth being a citizen of Heaven.

"Christianity does not set any type of social structure of the state in which people are supposed to live. A Christian can live in different societies, even in hostile environments in which circumstances can be highly unfavorable. It would be naive to believe that the state would aspire to meet the requirements of Christianity in everything. No one has ever built a state like that. Besides, you can reread the New Testament from cover to cover, but you will not find anything that would tell you what state structure to build: communism, socialism or capitalism. Christ did not bring any political reforms. If some people think that the American state organization does not comply with Christian principles, well then...One may agree or disagree with those people, but it's not going to change anything," Maksim Obukhov, a priest at the Moscow Patriarchy said.

Historically, Christianity existed under various political and economic systems. In Epistles, one can find recommendations to slaves and slave-owners. The medieval feudalism, capitalism, socialism, communism and then capitalism again...Czars, kings, presidents, parties...The church was living under all of those conditions. The Church has survived the period of suppression and the period of prosperity. Different dangers and temptations may have emerged in the church life in different times, but the spiritual life has never stopped. There is no time or generation which would not give saints to the world - the people who realized the Christian ideal in their lives. Two thousand years of the history of Christianity mean that 44 percent of the above-mentioned Americans have apparently misunderstood something in this faith.

If we speak about the Christian ethical teaching only, it should not be applied to capitalism or the market economy per se. It should be applied to the people who live and work inside those systems. This or that politician, businessman or scientist of politics can be either a preacher or a sinner. They can build their lives on the base of God's laws or contrary to them.

As long as this world exists, there will be injustice and social stratification in it. The question is how you treat all this. If you are wealthy and influential, it would be Christian-like to help the people in need. If you are poor, it would be Christian-like not to count other people's money. Making revolutions and taking possessions away is not a part of Christianity. Jesus Christ did not teach that.