Burglar beaten by a 14 year old 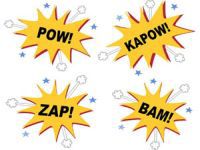 A 27 year old robber was beaten by the victim herself, a 14-year-old, last Sunday in the afternoon, in the district Olho D'Aqua, north of St. Louis. The burglar tried to justify his passivity saying he had taken the beating for fear of being framed under the "Maria da Penha Law" - which is used in cases of domestic violence when women are abused by boyfriends or husbands.

According to information from the Police in Maranhao, the teen was going home when two men, with remains of glass bottles, approached her and announced the robbery. They took her phone with an estimated value of around $350.

When they took off, the teenager ran behind the two, but she managed only to reach Raimundo Nonato Araujo, 27. When she saw the assailant, the teen began beating him with kicks and punches. He did not hit back. At that moment the police arrived and arrested Raimundo Araújo. The other assailant, identified only as Leanne, managed to escape.

This is the first time that Ramon Araujo was arrested by Maranhão police. At the station, he also said the teen had a corpulent physique and did not expect that kind of reaction to the assault of the girl. The police officers were also surprised by the reaction of the young girl.