Moscow to be splashed with gay rainbows in May 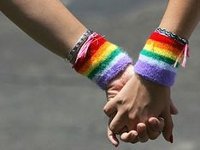 Moscow is getting ready for its first-ever gay pride parade. Spokesmen for Russian gay movements stated that the Moscow authorities gave official permission to hold the gay march in the capital.

Sources from the Moscow authorities said, though, that there was no permission issued regarding the event. However, activists of the gay movement have already started promoting the event, which is slated to take place on May 28.

The news about the official permission for the gay pride parade in Moscow became the talk of the day in the city instantly. The news appeared on all Russian gay websites; Moscow gay clubs began to organize special parties to celebrate the historic event.

The parade, which, as Russian gay activists say, will take place in Moscow at the end of May, will be called "Gay Pride: Homosexuality in the History of World Culture and Civilization."

"We want to raise the issue of homophobia and tolerance towards sex minorities. We will be holding placards of famous people who relate to sex minorities," Nikolai Alekseyev, the organizer of the march explained the "moral" side of the event.

However, officials from the security committee of the Moscow administration have not confirmed the fact of issuing the permission for holding the gay parade.

As it turns out, the format of the gay pride parade does not fall under the definition of a meeting, demonstration or march. It is referred to as "parade" only tentatively. Sex minorities would probably be glad to march along the streets of Moscow, but who knows what kind of dangers they can meet on their way. On May 28th, when the parade is supposedly going to take place, Russia will be celebrating the Day of the Border Guards. The latter may not understand the "moral side" of the "noble event."

Gay activists were planning to have up to 5,000 people participating in the event. However, only 500 demonstrators would be allowed. The chairman of the committee for public associations and religious organizations, Anton Paleyev, doubts that the residents of Moscow will be tolerant enough to accept and understand the unusual public action.

"There is nothing bad about the fact that such movements exist. But I do not think it is correct to publicly lash those who do not want to see it. As a deputy, I can not stay away from this, because the parade may lead to massive clashes and riots. It appears that Muscovites have not come to realize, either mentally or morally, that they have to be tolerant about it," Paleyev said.

Gay movement activists traditionally refer to such reactions as homophobia. They are going to hold the action in Moscow to make the Russian society accept them. Russian gays and lesbians have been trying to organize a public action in Moscow for several years already. Nikolai Alekseyev even filed a lawsuit against the Moscow government at the European Court for Human Rights. Alekseyev won the case and received a 30,000-euro compensation from Moscow.

Nevertheless, even members of the Russian gay community share different opinions on the matter. Some of them think that a gay pride parade is not necessary at all. Other say that Nikolai Akeskeyev is simply trying to create a reputation for himself to become Russia's most famous homosexual. He may have succeeded at that already.