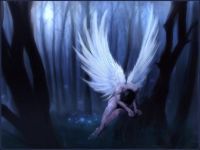 A baby fell from the fourth storey of a hotel in the city of Orlando, Florida, USA - and was caught by an attentive woman 40 feet below - and survived without so much as a scratch in the trusty arms of a British tourist. The mother of the 16-month-old baby called the tourist "an angel".

Truly it was a miracle what happened in Florida today. A toddler was playing on the balcony on the fourth and last storey of the Econo Lodge Hotel, Florida, when the tourist, a Ms. Helen Beard, from Worksop, UK, saw the child hanging from a railing. She just had time to run under the balcony and managed to catch the baby, Jah-Nea Myles, as she plummeted towards the ground.

Helen Beard clutched the baby from thin air and held her until the emergency services arrived -after careful examination in hospital she was given the all-clear, without so much as a scratch or a bruise.

The baby's mother, Helena Myers, told police: "She's perfectly fine. Not a scratch on her body. I'm thanking the Lord above right now for saving my child's life. I'm also thanking that lady because she was an angel sent from heaven."

A Happy Easter for this family...saved by an angel.