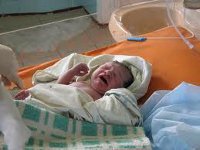 A bizarre baby was born in the settlement of Amsar Gyshlag, the Gusarsky district of Azerbaijan. The parents, including the mother, still do not know whether it is a boy or a girl: doctors are unable to identify the baby's sex, AZE.az website wrote with reference to ANS TV.

The baby was born on April 12. The child weighs 3,600 kilos and is 50 cm tall. The baby's mother, Bakhar Gurbanova, already started to breastfeed the child.

The woman said that she was expecting a boy - this was the result of an ultrasound examination which she had during pregnancy. During child-labor, obstetricians presumed that the woman would give birth to a girl.

However, it just so happened that the sex of the child remained unknown after birth. Local media outlets have not reported any details of the baby's anomaly.

Local doctors recommended the woman should take the baby to the capital of Azerbaijan, Baku. Seher Ismailova, a geneticist at the Central Clinical Hospital of Baku, said that such a phenomenon is extremely rare and occurs once in every 2,000 newborns.

"In such cases, the anomaly is removed through surgery. In this particular case, however, it seems to be a complicated objective since the baby's sex hasn't been determined," the doctor said.

The sex of the baby will be revealed as a result of genetic expertise, particularly after the analysis of its chromosomes.

As for the defect of the baby, medics assume that it is connected with the fact that the baby's mother was taking hormonal drugs during pregnancy. The influence of hereditary factors is also possible.