Gunshot wound in the head can make some people brilliant 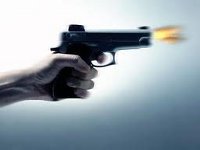 Shots in the head are most often fatal. However, there are some lucky people not affected by bullets. Such cases have happened both in the past and recently.

A resident of the Italian city of Turin Darko Sangermano arrived in Naples to his lover to celebrate the New Year's together. The couple went outside to join the festive, excited and tipsy crowd. In the midst of celebration 28-year-old Sangermano was suddenly shot in the head. The Italian was taken to a nearby hospital with heavy bleeding. While the victim was waiting for medical help, he suddenly sneezed, and the bullet flew out of his nose. Doctors said that the 22-caliber bullet hit the young man in the right temple, passed behind his eye and reached his nasal bone. It has not caused severe injuries to the Italian, and only small fragments of the temporal bone hit him in the eye, resulting in a surgery to remove bone fragments from his sockets. Doctors say that his health was soon restored, albeit not entirely. The man's right eye vision has worsened. In the summer he will undergo a laser eye surgery. Ophthalmologists are hopeful that the surgery will restore Sangermano's vision.

Meanwhile, the police reported that, most likely, the shot was an accident. According to investigators, he was injured when local residents began firing into the air. Altogether during the Christmas holidays three people were injured and one killed because of the explosions of firecrackers and firing of weapons.

Perhaps, the most incredible in the history of medicine was the story of a gunshot wound in the head that occurred in Russia in the 18th century. We are talking about the future commander Mikhail Kutuzov. During his military service, a Turkish bullet on two occasions hit Kutuzov nearly the same way, from his left temple to the right. The first time Kutuzov was bound to perish in battle when he was under 30 years old. The wound was so severe that doctors had no hope of recovery. Yet, Kutuzov has recovered, but lost his eye.

13 years later during the siege of Ochakov 43-year-old Kutuzov was mortally wounded again. The bullet, again, went right through from temple to temple behind his both eyes. The surgeon Massot who treated his wound commented that the fate must be preparing Kutuzov for something great, because he was still alive after two injuries fatal by all the rules of medical science. Three months later, Kutuzov returned to service.
Bullet of the shotguns and pistols of the late 18th century had the caliber of 17 - 25 millimeters.

If a bullet like this hits the head, the skull is shattered to pieces. Kutuzov got two of these bullets in his head, and survived.

What happens to the human brain after such injuries? In the best case, severe neurological disability. It was not Kutuzov's case. In contrast, the peak of his service career came at the time shortly after the second injury. The general mastered a new profession of a diplomat and achieved brilliant results.