Four wives always better than one? 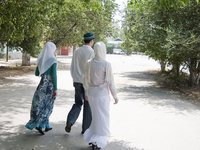 The debate regarding officially allowing polygamy in Russia has been going on for years. The main arguments in favor of polygamy are the existing families with multiple wives, whose position is now not protected by law, as well as shortage of men. Perhaps the fate of the third or fourth wife is better than being alone?

Peculiarities of life in a polygamous family have long become a familiar topic on Muslim forums and dating sites. There are people on these forums asking for advice on how to improve relations between the first and second wife. On dating sites men can indicate "single, looking for marriage" or "married, looking for another wife."

Responding to questions from those willing to enter into a polygamous marriage, Islamic theologians have consistently pointed out that one of the major conditions under which a true Muslim is allowed to have multiple wives is their full equality before the husband. In Muslim countries where polygamy is allowed, a man can have up to four wives, each of the wives has to be provided with a separate house. All the houses are built according to the same design so the wives do not feel deprived. Of course, only wealthy people can afford this, and in poor families all the wives and children of one man can live in a shack or on a farm together. This, however, leads to the violation of certain rules of the Muslim family residences. In particular, it violates the rule that none of the wives should see her husband going into a bedroom with her rival. The attention of the husband, too, should be equally distributed among the women. The husband has to spend equal number of nights with each of his wives, with the exception of the nights when a wife wants to miss her turn for one reason or another.

Regardless of age, the first wife has the title of "senior" and the fourth - the "younger". Other wives are referred to in order. According to the tradition, if the entire family lives together, the responsibility of the younger wife is the education of all children, regardless of who their biological mother is. The second and third wives have to take care of the household, and the eldest of all directs and assigns duties.

Proponents of legalized polygamy often point out that, according to a recent census, there are approximately 11 million more women than men in Russia, and every woman wants to get married. According to them, the women who are not able to get married still become second or third wives, only in European culture this status is called a "mistress."

In July of 1999 Ruslan Aushev, then president of Ingushetia, allowed polygamy in the country by his decree. However, the decree was suspended by Boris Yeltsin as contrary to the Russian Family Code.

Vladimir Zhirinovsky has repeatedly called for legalization of polygamy in Russia. In 2000 he introduced a bill that allowed men to have up to four wives, with mandatory consent of all existing spouses. The proposal was rejected.

The president of Chechnya Ramzan Kadyrov also supports the idea of ​​polygamy. "I am in full support of it," he answered a reporter's question about polygamous family. According to Ramzan Kadyrov, polygamy is better than leaving the family for a mistress. "This is better for a man than humiliating his wife by having a mistress, give jewelry and other gifts to prostitutes, and keeping his wife and children in need. If Allah permits polygamy, if the opportunity allows, you should provide equal rights for all wives,"- he said in an interview with Interfax.

What do women think of the issue of polygamy? Of course, there are women who are willing to share their husband with other women. There are cases where Russian ladies were not the only wives of Muslims husbands and even converted to Islam. They explained their choice by the fact that all Russian young men were drunks and there were no normal Russian men left, while polygamous marriage, even with an older man of a different confession, gave them hopes to experience a happy family life and raise children.

Malay Organization for Women's Rights "Sisters in Islam" is struggling to introduce the requirements of a polygamous marriage described in the Quran. In 1984, Islamic Family Law was introduced that listed five conditions to be followed by a Muslim who wanted to have more than one wife. He must have an appropriate financial situation; he must ensure that all wives are kept under the same conditions; existing wife or wives shall not be harmed, a new marriage shall be "just and necessary", a new marriage shall not, either directly or indirectly, lower the standard of living of the existing wife and other dependents. In 1996 the last condition was repealed, and in 2004 "just and necessary" was replaced with "just or necessary".

After some investigation, female Muslim human rights activists presented the men of their country the following claims: it turns out that, contrary to the requirements of the Quran, some men married second and third wives not only without being able to provide for them, but rather to force women to work and live at their expense. Income estimate of one polygamous family revealed that the husband brought in only a third of the total earnings. Many men did not remember the names of all their children, they did not recognize them in person, and, when meeting them, asked: "Which mother are you from?"

According to a poll conducted by FOM, the opponents of polygamy in Russia fear precisely this scenario. According to them, today quite a few Russian men do not bother themselves with hard work, preferring to live off financially secure wives. In the event of formal recognition of polygamy, when these men have three or four bread winners, "they will simply perch themselves on the sofa and lit up a hookah." In general, the idea of ​​polygamy does not find support of over 60 percent of Russians. According to them, love is the matter of two people, and polygamy is not consistent with Russian mentality.