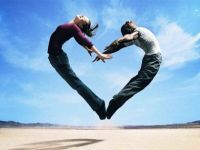 A brother and sister have found each other after being separated for thirty-five years. They met on a dating site and during their first real-life encounter, discovered that their childhoods had some uncanny similarities.

It was during their first real-life meeting, in a London pub that Sarah and George surprised each other when informing the other of their childhood. Same place, same names for the parents, same date of separation - 1975 - and each one had tried to find the other sibling but to no avail.

When the parents split up in 1975, Kate (then six years old) went to live in Edinburgh, Scotland with her mother and George (then 11) stayed in London with his father. Then they lost touch with one another. When adults, both had tried and failed numerous times to find their sibling, until they gave up. Kate had married and changed her name from Bentley to Kemp, making George's quest more difficult.

She went on to say that they discovered they had so much in common, it was as if they had known each other all their lives. They had.