Third World War to begin during Winter Games in 2014 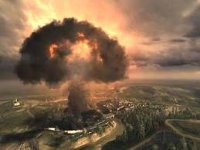 On March 24, well-known Russian astrologists, shamans and parapsychologists gathered to discuss forecasts for near and distant future.

"The phenomenon that they call the world financial crisis, and which, as they believe, is now ending, was not the financial crisis per se. It was just an omen of the imminent crisis. The real financial crisis is going to take place in the future," astrologist Aleksei Kolov said in the beginning of the meeting.

The most impressive astrological forecast was made by Pavel Globa: "Many attack me now claiming that I was promising Russia a quiet year. What kind of quiet year is it if earthquakes rattle Japan. But Japan is not Russia. There will be wars in the world this year, but everything will be fine in our country, except for the summer. The summer is going to be tough: there will be three eclipses in a row in June-July. This year, there will be six eclipses in total. We had such a catastrophic year as this one 20 years ago, when the Soviet Union collapsed," the astrologist said.

Eclipses will cause a lot of trouble this year, Globa warned. By the moment of the latest one, which is going to take place on December 10, armed conflicts will occur on the Balkans. Terrorists will plant a bomb at the Nobel Prize award ceremony.

According to Globa, this year can be compared to 1939 - the year preceding WWII, from the point of view of astrological data.

The participants of the meeting also unveiled the date for the beginning of Third World War. The new war is said to begin in March of 2014, during the Olympic Games in Sochi. It is also possible that the war may start five days after the Games end. Globa did not say in which country exactly the war would begin. He only said that the African revolutions would slowly be moving towards Russia. Massive protests will eventually spark in Central Asia, the astrologist said. According to Globa, such events are happening because of the Black Moon. NATO attacked Libya the day when the Black Moon allied itself with the sun. When the Black Moon allied itself with Uranus, the Japanese earthquake occurred.

In the nearest future, one shall expect revolutions in Syria and Yemen. The Yemeni leader will be toppled only in three years, though. Algeria will be the luckiest country among them all: the riots there will not last long.

"I studied the horoscopes of the leaders of all countries of the region. The Algerian president is the only leader who has no charisma at all. By the way, his birthday is the same day with Gorbachev - March 2nd, 1931. He will leave peacefully. They'll even give him a yacht and a villa. There will be no revolution in Algeria. As for Gaddafi's fate, the problem is that no one knows his birth date - it's either 1937 or 1940 or 1942. If he was born on June 7 indeed, he will die on his birthday - there is an eclipse just near that date. But I don't believe that he is a Gemini. He acts like an Aquarius. Newspapers have recently written that he is a son of a French pilot, they even published a photo of the pilot. I saw the photo - they both look the same indeed," Pavel Globa said.

Parapsychologist Larisa Vais did not predict anything positive either.

"It's going to be a long spring, the summer will be hot, six-fingered children and beasts will be born. I saw it inside of me," she said.

The parapsychologists also saw (inside of her as well, apparently) that the "supreme commander-in-chief" is already looking for his successor. The successor's name will start with a letter 'K'. Larisa Vais said that such visions had never tricked her before. Back in 1996, Larisa saw a Ukrainian woman with a braid. The parapsychologist even mentioned that in one of her interviews to a well-known Russian journalist during those years.

Now Larisa Vais can see a woman as well. This woman, Vais said, would be ruling Russia from behind the back of her husband, the president.

Speaking about global problems, Larisa Vais said that Japan would suffer from other mammoth earthquakes. "A lot of people will die on the planet this year," she said.
Andrei Dondukov, a shaman from Tuva Republic, said that the year 2009 marked the beginning of the era of Yamaraj, the god of death. "Everyone will be held accountable for all they did. Death will be especially close on November 5," shaman said.

Dondukov confirmed Vais's predictions. According to him, men lost their true power a long time ago. "We are living in the era of pseudo-patriarchate. This era will soon end and matriarchate will return," he said.

Russia will survive this change of trend easily. Dmitry Medvedev will remain the nation's ruler. Medvedev is the man, whom Russian Buddhists recognized as the incarnation of female deity - White Tara.

When asked about Putin's role, Dondukov said that Putin is a fighter.

"Putin is a military man, and Medvedev does yoga. There are two types of men in general. One of them is the horizontal type - this is where military men refer to. There's also the vertical type of men - they aim for spiritual growth. Medvedev is a true czar, the Lord's Anointed. Putin is just a duke," shaman Dondukov said.