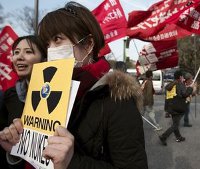 The Japanese Chernobyl still makes headlines all over the world. Radiation levels in the country have been growing, foreigners flee the country in panic. Russia has offered its help to Japan immediately after the disaster. The leader of the Liberal and Democratic Party of Russia (LDPR) Vladimir Zhirinovsky put forward an idea to offer the Japanese to move to Siberia. Russian top politicians also started to invite the Japanese to move to Russia. However, the citizens of the disaster-stricken country do not hurry to accept all those invitations.

Russians in Tokyo do not panic. They continue to live there saying that they have all they need: food, transport and electricity. They even claim that the Russian media whip up hysteria about the scale of the tragedy in Japan.

Russians mostly flee from the territories that suffered from the tsunami and from the areas close to Fukushima-1 nuclear power plant. Plane tickets from Tokyo to Russia's Vladivostok jumped in prices. Those who already landed in Russia, say that there is no food in grocery stores and that there is a shortage of water in the disastrous territories.

The Japanese are not fleeing anywhere. The country is overcrowded, and it is very difficult to increase the population in already overpopulated areas. President Medvedev said that Russia would be ready to welcome refugees to resort centers. "We can think about the possibility to use the labor potential of our neighbors, especially in little-populated regions of Siberia and the Far East," the president also said.

Medvedev virtually reproduced the offer from Vladimir Zhirinovsky. The latter stated a week ago: "Let them come to free spaces where they can build homes and maintain themselves. We have a lot of places where one can apply their hands and brains, especially Japanese. Let them acquire the citizenship, study the language and get assimilated," he said.

It seems that Russian officials believe that it is the Japanese who will help them realize ambitious economic modernization plans. Sergei Lisovsky, deputy chairman of the agrarian committee of the Federation Council, said: "We would need the Japanese indeed. Peter the Great used to bring the Germans to the country and they made an enormous contribution in the national development. This is a good idea, I would think it over," he said.

As for Prime Minister Vladimir Putin, he offered judo athletes of the country of the rising sun to come and train in Russia while Japan is recovering from the consequences of the disaster. The athletes refused.

Interestingly enough, many Russians supported the above-mentioned ideas. Many Russian bloggers invite Japanese refugees to their homes. A recent opinion poll showed, though, that there are many Russians who do not want the Japanese to come and settle in Russia. They obviously follow the proverb "If you don't do anything good, you don't get anything bad." They fear (43 percent of respondents) that their hospitality may result in the Japanese occupation of Russia. Thirty-four of the polled said that the immigrants can help Russia establish high-tech production, create new jobs and raise the living standards in the country.

However, it seems that the Japanese are not thrilled at the thought of moving to Russia. If they decide to move, they will most likely choose the Philippines, South Korea ans Australia - the countries that Japan has strong ties with. The Japanese are used to living in overcrowded space. Their life environment is completely different from that of Russians. They cannot live on spacious or deserted territories.