Everyone knows the towns and cities in the United Kingdom grapple with marauding gangs of drunken thugs in the evenings, and that under-age drinking has become an endemic problem in the land of Her Majesty. But a three-year-old treated in hospital for alcoholism? 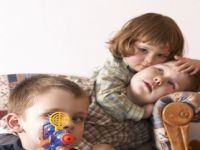 The incident happened in central England, in the Midlands where it has been revealed that this is not a one-off incident, although the child is thought to be the country's youngest alcoholic. Latest data reveals that the Heart of England NHS Foundation Trust admitted over 70 children aged between thirteen and sixteen years of age for emergency treatment for conditions related to alcohol abuse, while a further 106 children in the same age group were treated for alcoholism at hospitals in Birmingham, Solihull and Sutton Coldfield.

The question that arises is, where were the parents? The main point that arises is, this is not just a British disease, but seems endemic in most societies in European and North American countries.

What has happened to parenting, not just in the UK but across many cities in these countries? How many accident and emergency units in hospitals have to deal with constant streams of children being wheeled in, in alcoholic comas, being scraped off the floors of discotheques with just twelve years of age?

Where are the parents when these children are binge drinking cheap alco-pops before they leave home so they can get drunk quickly and spend less money when they go out? What has happened to our societies, in which for a start the alcohol is available to them, secondly the parents appear not to be exercising control and thirdly, young children are behaving like those in their late teens in their older peer groups?