U.S. remains the largest cocaine market in the world 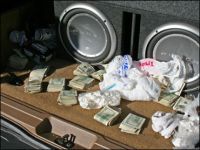 The United States remains the world's largest market for cocaine, with 4.8 million users, although its importance has been reduced in recent years, according to the INCB (International Board for Narcotics Control).

"In 2009, 4.8 million people consumed some form of cocaine in the U.S., compared with 5.3 million in 2008," the INCB said in its report in 2010. With this number of consumers, the U.S. represents 41% of the international drug market, ahead of Europe, with 29%, according to the board, stating that "Although the market for cocaine has been reduced in North America, it continues to grow in Europe."

In the U.S., Mexican traffickers control the illegal markets for cocaine, heroin and methamphetamine, according to the INCB, which ensures that in this country, the consumption of all drugs has increased, less of cocaine. About 38 million people used illicit drugs in the U.S. in 2009, representing an increase of 2.5 million compared to 2008. Marijuana remains the most widely used drug, with 28.5 million users.

As an effect in the rise in confiscations, there were shortages of cocaine "in many regions of the U.S. in 2009, representing an increase of prices and a drop in drug purity."

The INCB also revealed that between 1999 and 2007, the number of drug-related deaths has doubled reaching over 38,000 just in the last year. "One aspect that particularly troubled the Board is the increasing consumption of marijuana and prescription drugs containing controlled substances by young people of this country," said the agency responsible for overseeing the implementation of international treaties on drugs.

In fact, the overuse of drugs that can only be obtained by prescription is a major cause of addiction in the U.S., as the data indicates that 16 million people have used these substances in 2009, 800,000 more than last year.

In another context, the INCB also sees it as an "affirmation" of international treaties on drugs with the failure of the referendum held in November in California about a possible legalisation of marijuana to allow its cultivation, possession, purchase and consumption by those over 21 years old.