Staying in a hostel, buying a ticket in advance and making their own food are the keys to practicing "independent tourism" 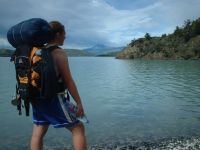 The designer Eduardo Sanches Morelli, 24, a student of advertising and Pamela Vaccaro, 20, took their vacation last summer traveling through Chile, Uruguay and Argentina. They spent five days in each country, that is, spent 15 days getting to know cool sights, visiting wineries and enjoying the landscape of much of the South American continent. All in all, including the passages, the backpackers spent less than $2,000 each.

Independent Tourism (or "backpack" even), how to meet new people and see new places without spending much money, is rising. According to Hostelling International, the hostel market is growing at 25% per year - and that kind of cheap lodging, as well as tickets purchased in advance and the foods made on their own are the key factors of "backpacking."

According to the "Backpacker ethnography - Annals of Tourism Research," most backpackers are aged 18 to 33 years who seek to spend more time traveling, spending less than the conventional packages charge for a few days of sightseeing. In Brazil alone, there are 45,000 active members of Hostelling International. Globally, there are 4,000 accredited hostels with 350,000 beds spread over 90 countries.

Due to the expansion of tourism backpacking, the quality of services - and competition between them - increases. Thus, getting to know South America in a nice way can be cheaper than you think, if the trip is well planned. The first step is to find airline tickets at low prices, since they are what consumes most of the money. For that, you cannot start looking only a week in advance ...

"I started planning the trip in April 2010, seeking shelter and ticket prices," says Eduardo. According to the designer, in August, six months before departure, they bought tickets for the adventure for less than $1,000 - each, of course.

Payment of the hostel booking was made via the Internet. In Santiago, Chile, they stayed at Bellavista Hostel for $22 a night. In Buenos Aires, at the Borges Design Hostel, they stayed in for $40 a night. In Montevideo, El Viajero Ciudad Vieja Hostel, $34 per day. All sites had breakfast and a communal kitchen where guests could prepare their own meals.

In Santiago, the duo met the city center, Viña del Mar, Baño Morales, the Andean Mountains and the famous winery Concha y Toro. In Buenos Aires, the main places visited were the Lujan Zoo, the Japanese Garden, Puerto Madero and La Bombonera Stadium. In the Uruguayan capital, Montevideo, the pair went to the Mercado del Puerto, the district Ciudad Vieja, the Pocitos and Punta Carretas. Even in the country, they went through Colonia del Sacramento and Punta del Este. The hint is that they try to do most of the tours on their own and save the amount charged by travel agencies. 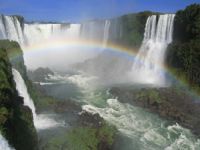 Most of the falls are within Argentinian territory, but from the Brazilian side a more panoramic view is obtained. They will take your breath away, an absolute wonder of nature.

The practice of backpacking is not just for international travel. In Brazil, this type of tourism is gaining more adherents. The businessman Rodrigo Willians Barreto Silva owns a travel company with a focus on the young audience (20 to 35 years), which offers destinations connected to nature with more attractive prices. "The initial idea was to join some friends to travel," says Silva.

Currently, Ecotrips organizes about 20 trips per year with the number of passengers jumping from 50 to 1,200, over the nine years of the company's existence. "Groups of friends also hire us to arrange private travel," says the businessman. According to Silva, besides the cheap price, the ease of making new friends is one of the biggest attractions. We offer alternative accommodation such as hostels, campsites and inns," he explains.

Many foreigners also come to Brazil for "backpacking." Rui José Oliveira, coordinator, with a postgraduate degree in hotel administration from SENAC, interviewed 250 of them that were in the country in 2005. Of the total, 94% were staying in inns, more than half had planned their travel over the Internet and 67% would travel to other countries in South America. "The foreigner spends U.S. $ 1,015.17 for 10 days in Brazil while in conventional tourism, while the backpacker spends U.S. $ 1,742.66 to stay almost 50 days," said Oliveira.

Despite the growth, the tourism specialist believes that Brazilians preserve prejudices about travel to other countries by way of backpacking. "It's a cultural thing, many do not know the scheme," he says.