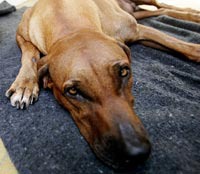 Packs of homeless dogs have become a serious thereat to people in large cities. The number of those, who suffer from homeless and aggressive animals, grows every year. It seems that there is no solution to this problem either. The authorities are unable to find the way which would be good for everyone. A group of Russian celebrities expressed their protest against the establishment of special dog shelters on the outskirts of Moscow.

There is hardly any person who can stay indifferent to the problem of homeless animals. Some people, especially those who suffered from dog attacks, believe that it does not matter how people choose to get rid of homeless dogs. Others claim that the animals must be protected from humans.

Several days ago, dogs killed a ten-year-old girl on the outskirts of the city of Omsk (Siberia). The girl's body was found by passers-by. Investigators found out that the girl was coming home after school when a pack of homeless dogs attacked her. The child died on the scene.

Many would probably understand the wish of the grieving parents to kill the dogs that had killed their child. However, the idea to kill all stray dogs around is not likely to find support with most people. Animal rights activists claim that it is people who are guilty of the growing number of stray dogs.

Dog breeders are the primary source for increasing the army of stray dogs. Indeed, many people are not ready to handle such a responsible and complicated business as to keep a pedigree animal.

Animal rights activists believe that Russia needs a presidential decree to economically regulate dog breeders' activities. The law would introduce a special tax and oblige dog owners to sterilize their pets at the time when animals enter puberty.

However, what can one do about the animals who live in the streets already and terrorize people? Moscow officials, for instance, put forward an initiative to catch homeless animals and deliver them to shelters in other regions of the country. Ecologists responded with saying that nature would fill the gap very quickly. First of all, stray dogs would begin to breed very fast. What is worse, they will become aggressive.

Russian celebrities stood up against the initiative too. Actor Yevgeny Mironov said, for example, that such a shelter would become a concentration camp, where dogs would be exterminated. The only way to relieve the city from the dogs and stay human is to sterilize the animals, the actor said.

The authorities of Nizhni Novgorod announced a competition to regulate the dog population in the city. The captured homeless dogs would be examined at vet stations to decided if they could be either sterilized or put down. Contractors participating in the competition will have to arrange the work to collect and transport dead animals to sanitary stations. Not less than 6,000 dogs are to be captured within the scope of the plan. The budget of the project is evaluated at $6.5 million. Each dog would thus cost the city 1,000 rubles ($30).

As many as ten dead dogs were found on Moscow's Yaroslavsky highway in February. Local residents and veterinary doctors are certain that the dogs had been poisoned. There no traces of violent death found on the bodies of the dogs. The people who were bringing the dogs food said they saw a man who had thrown some sausage to the dogs.

Needless to say that such methods of struggle are inadequate and absolutely inefficient. Nature will win anyway. The problem of homeless animals can be solved through responsibility, rather than deportation and killings.