Should childless adults be provided with child-free flights? 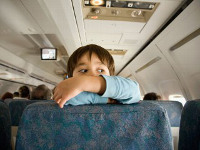 A new trend has been developing in Europe recently. European airlines introduce special flights in which children can not be accepted as passengers. The child free practice has already been launched in Sweden. In Britain, many childless passengers said during the polls that they would prefer to fly separately from children. Business class passengers are particularly annoyed by hysterical and screaming children, as well as by their parents, rushing about all the time and changing diapers.

Those who promote child-free flights say that this is not discrimination. According to them, it is a special level of comfort for the people who are ready to pay for silence. Can this practice be possible in Russia?

British Airways, Virgin Atlantic and Emirates conducted a number of polls among their passengers. The polls revealed that the children act as the primary factor to irritate most of passengers. Britain's largest travel advice portal TripAdvisor conducted a similar research two years ago. The poll revealed that 79 percent of British citizens supported the idea of introducing child-free areas in airplanes. Eighty-eight percent of childless adults said that they would like to travel in silence. Strangely enough, the travelers who have their own children (71 percent) also supported the idea.

Britain's largest airlines have not decided to introduce child-free flights yet. However, those who travel by train can already book such an option. Many consider this a form of age discrimination. David Chapple, the director of Business Travel and Meetings trade show, does not share such a critical point of view.

"It's understandably frustrating for business travellers, who have paid a premium in expectation they can work and sleep in comfort, to have that peace disturbed by children," the Daily Mail quoted him as saying.

Paul Charles, the former director of Virgin Atlantic, urged everyone to be humane.

"It would be a bad decision by an airline to ban children. Once you did, would you start banning other types of travellers? It would be a mistake," he stated.

Frank Barrett, The Mail on Sunday's travel editor: "I'm always amused to see children in business class on flights. What sort of business can these children be travelling on? What work does a six-month old baby have to do in New York? However, much as I hate being kept awake all night by a grizzling child, I think that starting to introduce passenger apartheid might be a dangerous step. Where would it end? Banning fat people, roping off anyone who has smelly breath? We'll just have to grin and bear the presence of kiddies, I'm afraid," the Daily Mail wrote.

While carriers such as British Airways, Virgin Atlantic and Emirates are speculating on the subject of children on board, Thomas Cook Airlines, also a British carrier, has already launched the service. However, the child-free practice was first introduced in Sweden, not Britain, Euromag.ru reports with reference to Swedish newspapers.

It is an open secret that the Swedish population has been growing steadily for years owing to supportive family policies in the country. The number of children on board Swedish planes has increased as well. It's not that serious, though. The citizens of Scandinavian countries follow a new trend to raise their children. Scandinavian parents do not torment their kids with moral teachings - they prefer to raise them as free and creative individuals instead. That is why Scandinavian mothers and fathers do not bother hushing their crying babies on board airplanes.

Therefore, there is nothing surprising about the fact that Sweden pioneered in introducing childless flights. Britain's Thomas Cook Airlines and Germany's Tui Fly decided to follow the example. "Adults only" jetliners fly to Crete and Majorca, for instance.

There are no special flights in the United States yet, but the issue is being discussed there actively. The subject came into public attention after the scandal with AirTran's Florida-Massachusetts flight. The flight was delayed for 15 minutes, but one of the families on board was begging their three-year-old daughter to take her seat. The airline eventually asked the parents and their child to disembark. The incident received an extensive coverage in the press and in online communities. The number of those sympathizing with the parents were in the minority.

Another incident took place last year in Florida. A woman sued Airways Quantas claiming that her ears started bleeding because of the screaming child who was sitting by her side.

This is an extreme situation, of course. Most often, children simply ask why and how questions, look into other people's eyes, run about and push the seats in front of them with their legs. Many passengers believe that children violate their rights for a quiet flight. Children do not usually fly business class, but business people may often hear children screaming from the economic class, which may distract them from important thoughts.

Natalia Karpovich, an official with the State Duma Committee for Family and Children, believes that passengers do have a right to travel in silence. However, it should go about additional flights, whereas common flights should not be restricted. In her interview with Newsinfo, Karpovich said that it was very unpleasant for her, as a mother, to deal with such an issue.

"Do you think such a service may appear in Russia?"

"Separating flights with children and banning parents from other flights is a mistake. I believe that a child is a citizen of their country and imposing such restrictions would be a violation of the Constitution."

"European business people claim that they need such a service."

"Well then, let them organize their own special flights. The society is not supposed to meet the requirements of several people, who say that children are bothering them. Maybe they will simply arrange additional VIP flights for entrepreneurs alone. They usually flight either early in the morning or late at night. I believe that they could organize special flights for that, with special prices. This is a form of business rather than a wish of the society. If they have such an issue in Europe today, why not organizing flights on small planes for entrepreneurs, who are ready to pay, for instance, not 200, but 500 or 1000 euros. This is a right of a carrier to offer an additional service. But for such carriers as Aeroflot, making child-restricted flights would be a violation of the Constitution of the Russian Federation. It can be practiced as a specific service, but not as a separate flight - this would be detrimental to the society.

"What is your attitude to this phenomenon from the moral point of view?"

"Being a mother, I do not understand this. However, if it's ok for the people who fly with children then why not? We do not advocate them flying with us, with our children screaming and running about the plane. We won't be offended if they fly separately. As a human being and an employed person, I can understand entrepreneurs, but it is not very pleasant for me, as a mother, to hear that.

"Russia easily adopts many Western manners. Many young people start treating their children the way many Europeans do. They decide to have children after they have a successful career at first, although they can be physically unable to have a baby by that time. There are Russian men and women who follow the child free movement. They get sterilized to live just for themselves only. If those adults have this attitude to their own descendants, just try to imagine how they hate someone else's children. I believe that this question of child-free flights may appear in Russia some day too," Natalia Karpovich concluded.