Middle East: nothing will ever be the same

The fall of dictatorships in Egypt and Tunisia shows that the U.S. can no longer keep the power scheme it set up for over three decades. Powerless to act directly with the military, the U.S. tries to articulate transitions that change the form of domination, but keep its essence. The Army chose Mubarak's resignation because it realized that his presence had united the opposition. They hope that without him, they might co-opt the opposition sectors to a moderate coalition - with El Baradei, the Muslim Brotherhood, with the support of the U.S. and Europe. 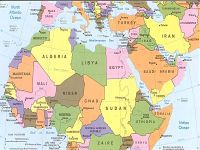 The Middle East has become a pillar of the foreign policy of the North American empire for two good reasons : the strategic need for safe and cheap oil supplies to the U.S., Europe and Japan, and protection for Israel - key U.S. ally in the region, surrounded by Arab countries.

Hence the rise of Arab nationalism has become one of the most frightening ghosts to the U.S. in the world. On the one hand, the nationalisation of oil by nationalist governments directly affects the interests of oil giants - North American or European - and the propagation of anti-imperialist, nationalist ideology - Gamal Abdel Nasser was the leading exponent - as well as the Palestinian question.

The contemporary history of the Middle East centers on the Arab-Israeli war of 1967 as its most important reference. The union of Arab governments allowed the recovering of the claim of the Palestinian state, which was answered by Israel with the invasion of new territories - including Egypt - with the direct military support of the U.S.A.

A new conflict began in 1973, now accompanied by the politics of OPEC to increase oil prices. From that moment, the West sought to overcome its dependence on oil or it would attempt the dividing of the Arab world. This second possibility triumphed, with the Iraq-Iran war, encouraged and armed by the U.S., which struck two countries with nationalist governments, who became mutually neutralized in a bloody confrontation. As a by-product of war, Iraq felt entitled to invade Kuwait - with tacit U.S. approval - which was taken as a pretext for the invasion of Iraq and the definitive settlement of U.S. troops in the very center of the richest oil region in the world.

The U.S. managed to divide the Arab world and has, on one hand the most reactionary regimes - led by monarchies, beginning with Saudi Arabia, which holds the largest oil reserves in the world, and the other moderate governments like Egypt and Jordan. The greatest North American achievement was the co-optation of Anwar El Sadat, Nasser's successor, who surprisingly normalized relations with Israel - the first regime in the region to do so - paving the way for the creation of a moderate, pro-North American bloc in the region, which is characterized by the resumption of relations with Israel - and therefore the recognition of Israel - and virtually abandoning the Palestinian question. This also became a moderating force in OPEC, in the interests of the western powers.

Egypt as a country has the region's largest population, with large oil production. The country also once had the biggest nationalist leader of the entire region, Nasser. Now it has become crucial as a political pawn of the U.S. in the region. Not coincidentally, Egypt became the second largest country to get U.S. military aid in the world after Israel and ahead of Colombia.

This neutralization of the Arab world, by appointment of governments and the U.S. military presence in the heart of the region - updated with the invasion of Iraq - was in itself an essential element of North American politics in the world and the guarantee of oil supplies to supplement the declining oil production in the U.S.A. and all oil supplies to Europe and Japan

That is what is at stake now, after the fall of dictatorships in Tunisia and Egypt. Impotent to act directly with their military, the U.S. tries to articulate transitions that change the form of domination, but maintains its essence. The Army preferred Mubarak's resignation, because they realized that his presence had united the opposition. They hope that without him, they might co-opt the opposition sectors into a moderate coalition - with El Baradei, the Muslim Brotherhood, and with the support of the U.S. and Europe - that can make constitutional reforms, but control the succession process in the elections of September, managing to demobilise the popular movement before it can forge new leadership.

Independence could be extended to other countries in the region - of which Algeria, Jordan, Morocco and Saudi Arabia are strong candidates. The fall of the dictatorships in Egypt and Tunisia demonstrates that the U.S. can no longer maintain the scheme of power that they did for over three decades. The least that can be expected is political instability in the region, until other coalitions of power can be organised, whose character will colour the new period which the Middle East is set to enter.