Can easy money make you happy? 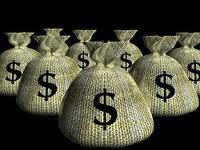 Many people believe that everyone in the modern world is greedy for gain. This popular belief has recently been rebutted by a man from Russia's Vologda region. The man found bags of money worth 3.5 million rubles ($116,000) and returned the find to its owner, Russian Post. Is this story an exception, or are there people in the world who do not think that money is all that matters?

The story, which took place in Russia's Vologda region this week, has become the talk of the day in the country. Bus driver Fyodor Korotayev was doing his job, taking workers from Vologda to the town of Gryazovets. The driver and the passengers noticed several bags on the road. The man pulled over to see what was there in the bags. All the bags, labeled were "Russian Post" logos, were filled with cash. As it turned out later, a group of men from Vologda, the driver and his passengers, could become 3.5 million rubles richer.

The workers offered the driver to share the find, but Fyodor Korotayev strongly rejected the idea. He took the bags to the nearest police station. An official of the Internal Affairs Department in the Vologda region said that law-enforcement officers did not believe the man at first when he told them that he had found bags of cash on the road. They could not even believe their eyes either, when the man put the bags on the table and opened them.

It seems that many employees at Russian Post were just as surprised when they were informed that the lost money had been returned to them in its entirety and good condition.

For his honesty and good conscience, the man will be awarded with a yearly subscription to ten periodical publications that he chooses from the catalogue. In addition, the headquarters of Russian Post in Moscow also prepared a valuable gift for Korotayev.

The hero himself told Vesti that he was used to making his earnings honestly and that he was going to do so before his retirement. "I am going to retire in a year," the man said.

It seems very surprising indeed that there are still people in the world who can easily refuse from easy money. Such stories happen regularly in many countries of the world. As it turns out, people decide to return easy money because they are afraid of it.

The man came to the bank to withdraw 100,000 rubles from his account to pay salaries to his employees. Having received the money, he went to his office, where he discovered the bonus of 900,000. The man, named as Sergei Mordovsky, realized that someone else would have to suffer for the silly mistake. Mordovsky came back to the bank the same day and returned the money.

Russian police officers can also commit good deeds. Viktor Sorokin, a police officer from Moscow, was going to enter a car accessories store, when he saw a suspicious bag near the doors. It was Viktor's day off, but he made up his mind to check the bag. To his great surprise, instead of a bomb the man found 200,000 euros ($154,000) and 600,000 rubles ($20,000) inside.

There was also a card in the bag with a telephone number of its owner, a local businessman. It later turned out that the businessman had visited the store that day, and did not notice the bag of cash falling out of his vehicle.

Interestingly enough, the people, who find bags of cash and then bring them back to their owners, say that they acted normally, not just properly. Not all people want to make make money from other people's misery - that's a fact.

As they say in Russia, easy money doesn't exist. Is it really worth it to push one's luck and appropriate someone else's riches? Even if you realize that you will never be able to earn a half of what you found?

Those who think that people like Fyodor Korotayev are crazy should try to look at a different side of the story.

Callie Rogers of Britain became the youngest winner of the British National Lottery eight years ago. She was 16 when she won 1.8 million pounds ($3.5 million) in the lottery jackpot in 2003.

Callie and her foster parents were living in a tiny house. Like all teenagers, the girl was dreaming of leading a luxurious lifestyle. Six years after the grand victory, the British girl only had $30,000 left on her account. Reporters found out that the girl had wasted all her money. Callie did not say how exactly she had spent her millions. The only thing that she had left from the generous gift of fortune was silicone breast implants and aftermath of drug addiction. Rogers became addicted to drugs when she realized that the money that did not make her happy would end some day.

Psychologists say that when you become a millionaire very unexpectedly, and - let's face it - undeservingly it is a huge mistake to think that your whole life will turn into never-ending celebration. The effect, which acquiring unexpected wealth produces on human psyche, is similar to the loss of a loved one. It undermines the human nerve system. The shock makes a newly made millionaire lose their sense of reality, while their life begins to change so fast that it is impossible to control it.