Should corporate dress code be considered form of fascism? 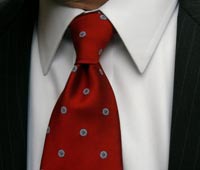 The subject of dress code has become very actual in Russia recently. High-ranking priest Vsevolod Chaplin caused quite a commotion in Russia with his suggestion to introduce the national dress code for Russian men and women.

"It's not bad that companies and high schools practice dress code rules in Russia today. It would also be good to think of a national dress code. If a woman wears a miniskirt, she can provoke men - both Russian men and men from the Caucasus. If she is drunk at that, she can provoke men all the more. If she pushes men towards establishing a contact with her and then gets very surprised that the contact ended with rape, she is not right even more so. Women's behavior in public places - at college or at work is not just their personal business. It touches upon men just as much as it touches upon women. A man wearing a pair of shorts, a tank top and flip flops in a city does not deserve any respect either. One can only feel sorry for him, if he a homeless person, for instance," Chaplin wrote.

In Europe, many discuss the 43-page manual, which a Swiss bank published to regulate fashion trends of its employees. The booklet touches upon every minute detail of people's clothes and looks at work, including underwear styles.

The administration of Switzerland's UBS AG Bank ordered to write the book of special regulations to make people wear appropriate clothes to attract more clients to the bank.

According to the instructions, bank employees can only wear dark-gray, black or dark-blue suits because these colors symbolize competence, formalism and temperance. The code tells male employees not to wear tight shirts, to always tuck shirts in their trousers and to wear T-shirts underneath dress shirts. The booklet also regulates the height of shirt collars and the length of sleeves. Short-sleeved shirts and cufflinks are out of the question.

There is a whole chapter about ties. Needless to say that all male employees working at the bank are obliged to wear ties. The booklet says that the tie knot should match the facial contours of an individual. Wearing one and the same tie for two or more days is considered ill-mannered at the bank.

Strangely enough, the administration of the bank does not recommend wearing nylon underwear for men.

Women's clothes are regulated just as strictly. The code tells female employees how to apply makeup, what kind of perfume to wear and what color stockings are acceptable. It advises them not to show roots if they color their hair, The Associated Press reports. Black nail polish and nail art is forbidden, heels should not be higher than seven centimeters, jewelry should be minimal, stylish glasses are not acceptable.

The code stirred a controversy in Switzerland. Many Swiss citizens were concerned about the fact that they were being told how they were supposed to look like almost every day of their life.

Russia's Gazprom released a similar dress code a couple of years ago. The code, which leaked on the Internet, described requirements to women's hairstyles, nails, as well as the color, the fabric and patterns on their clothes and shoes. Gazprom employees were even offered the list of stores, where they could purchase the required outfits.

In Russia, many are concerned about the way other people look both at work and in every-day life situations.

Ramzan Kadyrov, the President of Chechnya, released an expressive statement on the subject.

"If women appear semi-naked at work, men will not be able to work there. As for me, I would just stare at them all day and then would think at night how I could "salam-alaikum" them. That would push my work somewhere far into the background. If a woman goes to work, she is supposed to dress accordingly. She must wear a kerchief and cover her body with clothes," he said.

Employees of Citibank office in New York may probably share Kadyrov's views. The bank has recently fired a female employee for her revealing outfits. The woman was wearing decent clothes, but she was attracting too much attention in the office. She was eventually asked not to wear tight clothes and high heels.

It goes without saying that true beauty can not be hidden underneath clothes. Does it mean that one should display all their beauty and sex appeal to the public?

"Any restriction or regulation in clothes, which must speak for your religious, sexual or any other preferences, is called fascism," Russia's fashion historian Alexander Vasiliev said.