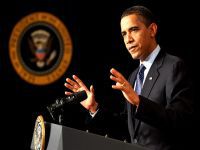 Obama's speech on the State of the Union in Europe has triggered a torrent of praise. On television, radio and newspapers analysts of the bourgeoisie reacted enthusiastically to the U.S. president's speech. They virtually identified him as the providential statesman, Barack Obama, at the helm of the White House who will save humanity.

It is on record that his speech was interrupted by applause 75 times by the congressmen as the outline of his new strategy favorably impressed the opposition.

The satisfaction of the Republicans is understandable now that they have a majority in the House of Representatives. He also praised the Wall Street tycoons and large corporations.

Barack Obama's speech was marked by a sharp turn to the right of his previously stated policies. The balance of the speech was the swinging of the president's promises which justify the fear that in the second half of his mandate, not only will he abandon the humanist social projects that generated hope for millions of Americans as he ostensibly will favor more financial capital and radicalize a foreign policy marked by aggressiveness and ambition for global hegemony.

Stripped of his populist rhetoric, what is left of the presidential address - an exercise in hypocrisy - an hour's State of the Union?

* He intends to maintain the "leadership that made the U.S. not only a point on the map, but the light of the world."

* Euphoria because "the stock market has rebounded with fervour and the profits of large companies are higher."

* The desire to "make the U.S. the world's best place for business."

* Much concern that China had built "the fastest computer in the world" and is manufacturing "trains faster" than the Americans.

* Fear of the economic development of India and China.

* Intention to reduce the taxes paid by large companies.

Escalation of aggression in the world

The concept of America as "Light of the World" returns to the myth of the predestined nation, the only one that can save mankind.

Obama, in the synthesis of what was done and not done in the field of international politics, clarifies this concept by expressing pride in the mission accomplished in Iraq, "where nearly 100,000 of our men and women left with their heads held high." Obviously he omitted that tens of thousands of American soldiers continue to occupy that plundered and vandalized country.

Incidentally, the same day he uttered his speech, more than 50 Iraqis died in Baghdad as a result of a bomb. Later in the evening, just as many were killed. Images of the Pax Americana.

Identical pride was expressed about the course of things in Afghanistan, one of the expressed priorities of his foreign policy, a country attacked where an army of more than 100 thousand U.S. soldiers and contractors (backed by 60,000 from NATO) are waging a genocidal war which killed tens of thousands of Afghan civilians.

The President is also feeling satisfaction for "revitalising and expanding NATO with our cooperation in everything from anti-terrorism to missile defense."

Translated into ordinary language, that does not distort reality, Obama rejoices over the new strategic concept of NATO to enabling him to act on a global scale where and when Washington wants. The militarisation of space under U.S. hegemony is another goal for him. He sees it as a deserving project worthy of the gratitude of his countrymen.

He did not speak of the seven bases that the U.S. will install in Colombia or the presence of the U.S. Navy's Fourth Fleet in the waters South America, repudiated by the peoples of the region.

He announced that in March this year he will travel to Brazil, Chile and El Salvador to "forge new alliances throughout the Americas." He did not specify what kind of alliances, expressing, however, satisfaction with the bilateral agreements signed with Panama and Colombia, two countries semi-colonised by the U.S.A.

Reading the State of the Union speech confirms that President Obama will give continuity to a foreign policy less noisy, but no less dangerous to humanity than that of George Bush.

It would be lacking not to note that many minutes of his rhetorical and grandiloquent speech were devoted to the evocation of individual successes of unknown young Americans he pointed to as examples of the superiority of the American way of life.

The closure does not clash with the spirit of a messianic message. Inspired by the founding fathers of the nation, Barack Obama, citing his example, affirms his belief that it is "thanks to our people that our future is full of hope." And he concludes:

"Thank you, God bless you and God bless the United States of America."

Strange is invoking the divine one adopted by the U.S. President, glorified by the big European bourgeoisie.

* Miguel Urbano Rodrigues is a Portuguese writer and journalist