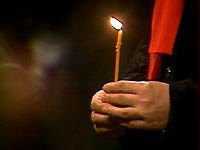 A court of the town of Kogalym delivered an unexampled judgment for Russia. The court found guilty the woman, who did not let doctors perform blood transfusion for her son over religious beliefs. The woman's son died.

Such incidents, when people either refuse from medical interference or do not allow doctors help their children for religious reasons occur on a regular basis. As a rule, news agencies mostly report about members of Jehovah's Witnesses organization, which forbids blood transfusion for its adepts.

The above-mentioned woman, Natalia Podlozhevich, was also a member of Jehova's Witnesses. Her five-year-old son was hospitalized in a critical condition. Doctors told the woman that the boy had to receive blood transfusion immediately. The woman refused from the procedure, and the child died. The woman was found guilty on Article 125 of the Penal Code of the Russian Federation - "Failure to give assistance to person in mortal danger."

The criminal case created prerequisites for establishing a law-enforcement practice to call members of religious organizations to criminal account for their decision to refuse blood transfusion to minors over religious beliefs, officials said.

The issue of relations between religion and medicine is a subtle one. On the one hand, the majority of religious movements do not deny official medicine, but there are aspects which raise strong protests with the followers of certain confessions.

A 22-year-old man died in a clinic of St. Petersburg at the end of January. The young man was diagnosed with acute leukemia, but he strongly refused from blood transfusion. Alternative methods did not help the man, who also happened to a member of Jehovah's Witnesses.

Eighteen months ago, the doctors of Russia's Polenov Institute for Microsurgery took a legal action seeking permission for blood transfusion for their patient, who was suffering from a brain tumor. The court took the side of the patient, also a member of the Jehovah's Witnesses. Luckily, the surgery to remove the tumor went well, and the woman survived.

In 2008, Russia was shocked with the story of a schoolgirl from the Vologda region. The girl, named only as Svetlana, wrote a statement in which she refused from the surgery to remove a tumor from her abdominal cavity. The girl and all her family were members of the Temperance Society of Spiritual Christians. The girl's family and the patient herself were certain that she would be healed with prayers, without surgical intervention. "I refuse from the medical treatment for my daughter because I am sure that God will cure her of all diseases," the girl's father told the Rossiiskaya Gazeta.

Orthodox priests may also urge believers not to ask for medical help, but to seek God's help with the help of prayers only. However, such an opinion contradicts to the basis of the social conception of the Church.

Father Dmitry said in an interview with Pravda.Ru that there are many things in modern medicine, which the Orthodox Church does not accept.

"There are things in medicine which do not conform with the Commandments. Abortions and euthanasia are unacceptable, and the Church has its own position about such medical practices. If medicine violates "Thou shall not kill" Commandment, we will always be standing against such methods. If the state becomes criminal, as it happened in fascist Germany 70 years ago, the Orthodox Christians will have to live under the laws of Gospel.

"As for this particular case (non-acceptance of blood transfusion - ed.), the position of the Russian Orthodox Church reflected in the social conception coincides with the position of the Russian legislation. If it goes about a human life, about his or hers health, then the life and health of a person is always a priority, of course. There are no reasons to sentence them to death or yearnings in this case."

It is extremely important to legally regulate the issue, the priest said. "If the activity of a religious organizations becomes a risk zone for its followers and members, this organization must be banned. Such organizations must be banned on the territory of Russia, and this is absolutely normal. This is a democratic norm because it is based on concerns for people's lives," Father Dmitry said.

"Religiousness does not guarantee goodness. A spiritual experience may not be pure, it can be a dark experience as well," he concluded.