Russia marks its own Groundhog Day 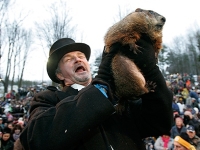 America celebrated its famous Groundhog Day on February 2. This holiday is little-known in Russia, but it seems that traditions of the American folklore are coming to Russia slowly but surely.

The zoo in Ekaterinburg's Russia is going to support the American tradition. The zoo will unveil its own animal meteorologist to the public on February 3. Unlike the American groundhog, the Russian rodent will predict the coming of spring in its own peculiar way.

The children attending the classes of young biologists at the zoo made a special maze with several exists in it. Little paper rolls with prediction written on them will be placed near each exit. The rodent will choose one of the predictions on its way out of the maze.

In the United States and Canada, Groundhog Day is considered a folklore holiday. Numerous festivals are held throughout the country to attract tourists. One of the most famous groundhogs in the United States lives in Punxsutawney, Pennsylvania. Festivals in his honor have been held since 1887. The town was used as a location for filming a well-known comedy "Groundhog Day."

Another popular rodent, Willie, lives in Canada's Wiarton, Ontario. In New York, the official meteorologist of the city lives on Staten Island. He gives his weather forecast every year on February 2, at 7:30.

The tradition to use animals for weather forecasts appeared many centuries ago in Ancient Rome. The Romans used a hedgehog for the purpose - the animal also predicted weather by seeing or not seeing its shadow.

The tradition was handed down from generation to generation. In North America, the settlers decided to keep the tradition in memory of their homeland. In America, the honor of the animal meteorologist was bestowed upon the groundhog.

Needless to say that the presence of animals in this ritual is just a way of entertainment. The roots of the holiday originate from the Christian holiday of Candlemas, which was also celebrated on February 2 during the Gregorian Computation. A cloudy day meant that the spring would come early. According to the modern tradition, the groundhog does not see his shadow if the sky is covered with clouds. If the day was sunny, the winter would last until the middle of March.

Unfortunately, many of such interesting traditions have been lost in history, but some of them entertain and inspire people still.