Vanga: Russia will be world's only superpower 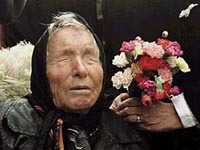 On January 31st, legendary Bulgarian mystic and clairvoyant Vanga would celebrate her 100th anniversary. Vanga became world-known for her incredibly precise prophesies which she made in many fields, including politics.

Vangelia Pandeva Dimitrova's interest in politics was not incidental. She was born on the territory of modern Macedonia - the land which was an apple of discord for years between Turkey, Greece, Bulgaria and Serbia. Her native land experienced two World Wars in which the Bulgarians and the Serbs were struggling in different camps.

Vanga settled in Bulgaria's Petrich during the 1930s, where she predicted the beginning of WWII. Her fame spread very quickly throughout Bulgaria, and one day she was visited by King Boris III. Vanga warned the king against Bulgaria's participation in the war. Bulgarian politicians did not listen: the country joined Hitler and then found itself among the defeated. It was only the post-war patronage of the USSR that rescued Bulgaria from the territorial dismemberment.

The Bulgarian politicians, who visited Vanga, spread the news about the prophetess to their counterparts from other countries. As a result, Vanga became known in the whole world. The list of events, which she predicted so precisely, is really impressive.

King Boris III visited her again in 1942 and 1943. The blind woman (she was in her thirties back then) told the king that he would die on August 28, 1943. In February of 1943 she told the king that she could see a red flag above his palace. Her predictions came true. King Boris III died on August 28, and the red flag was raised above Sofia in the autumn of 1944. Bulgaria became a socialist country.

In socialist Bulgaria, where Vanga spent most of her life, people treated clairvoyants and mystics mostly negatively. Communists believed that Vanga was spreading superstitions, distracting people from the building of socialism. In the autumn of 1952, the prophetess found herself in big trouble when she said that Josef Stalin would go into the nether world. Vanga was jailed as a result of that prediction, albeit not for long.

The prophesy came true - the Soviet generalissimo died indeed. Stalin's death did not save the prophetess from political persecution, though. The fact that Vanga was a native of Macedonia (Yugoslavia) was haunting the minds of Bulgarian special services. Bulgaria was having very tense relations with Josip Broz Tito's Yugoslavia, which gave Bulgarian secret service a reason to believe that the prophetess was an agent of the western neighbor.

During the 1970s, Bulgarian special services continued to collect compromising materials against Vanga. They searched her home once and found 90,000 levs, which was a huge amount of money for a socialist country. Vanga was not jailed, but she was described in reports as an underdeveloped and impudent woman.

There were high-ranking officials in the country, who defended Vanga. Many in Bulgaria still remember the story when an official lost his briefcase with important documents. The police and the special services could not find the case, so they had to ask Vanga's help. The case was found, and the prophetess was awarded with a letter of gratitude.

In general, one may say that the authorities of socialist Bulgaria treated Vanga differently. On the one hand, the communist ideology made the authorities struggle against the "witch." On the other hand, the local elite realized that they could make profit on Vanga. Special services took her visitors under control and began to collect 10 levs from Bulgarian and $50 - from foreign visitors. Economists calculated that Vanga brought 9 million levs to the Bulgarian treasury.

In 1967, Vanga was employed for a non-existent position as a "state official." Her life took such a turn owing to the efforts taken by the daughter of then Bulgarian leader Todor Zhivkov, Lyudmila Zhivkova. Lyudmila was interested in esoteric teachings and visited the prophetess many times. Lyudmila enjoyed great popularity in the country. She developed a very warm friendship with Vanga herself.

In the beginning of 1979 Vanga said that Lyudmila Zhivkova would die in a car accident. Special services tried to prevent the tragedy, but it did not help. Zhivkova survived the car accident, but then died two years later.

In 1987, when Todor Zhivkov was still ruling the country, Vanga predicted major changes for the nation to come. She said that Bulgaria would soon have another leader, a prominent scientist, who would not be a proponent of Lenin's doctrine. In 1992, Bulgarian philosopher Zhelyu Zhelev came to power in the country. The socialist regime in Bulgaria collapsed, and the country continued its development following EU and NATO standards.

Vanga was predicting major political events happening in the whole world. She predicted the incursion of Soviet troops in Czechoslovakia, the assassinations of US President John F. Kennedy, Indian prime ministers Indira and Rajiv Gandhi, the collapse of Anastasio Somoza's dictatorship in Nicaragua and many other historic events.

Nowadays, many Russians wonder if Vanga's prophecy about Russia is going to come true some day or not. In 1979, during her meeting with writer Valentin Sidorov, Vanga said: "All will thaw, as if ice, only one remain untouched - Vladimir's glory, glory of Russia. Too much it is brought in a victim. Nobody can stop Russia. All will be removed by her from the way and not only will be kept, but also becomes the lord of the world."

Before her death in 1996, Vanga predicted glorious future for Russia again. According to the Bulgarian clairvoyant, Russia will be the world's only superpower. Specialists calculated that 68 percent of her prophecies had come true. We only can wait and see if her other prophecies become real or not.