The warning signs are there - catastrophic natural disasters around the world have had a serious impact on the food supply chain and the FAO has warned Governments that the wrong policies could see a disastrous spike in food prices in 2011. As usual those hardest hit will be the poorest segments of the population. 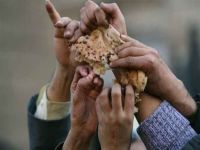 The FAO has issued a guide for policy-makers in developing countries, giving indications on the best policies to adopt to combat the negative impact of high food prices. Richard China, the Director of the UN Food and Agriculture Organization's Policy and Programme Development Support Division declares that in the crisis of 2007-2008, "hastily taken decisions by governments to mitigate the impact of the crises have actually contributed to or exacerbated the crisis and aggravated its impact on food insecurity".

The FAO therefore requests countries not to take short-term policies which might have negative medium or long-term effects. An example is the export restrictions practised by some countries which produced a surplus of food, which reduced the food supply in circulation in 2007-2008 and pushed up prices.

The guide underlines the fact that low income developing food-deficit countries have been hardest hit by high food prices, because they are the ones who have to pay higher import prices and it quotes the example of Africa, where almost all the countries are net importers of cereals.

The signs are not good. In December 2010, the FAO Food Price Index peaked, causing the Organization to state "With this new price shock only two years after the crisis in 2007-2008, there is a serious concern now about the implications for food markets in vulnerable countries".

Natural disasters have played their part in recent months, from the fires in Russia last Summer which wiped out the harvests, floods in China, Pakistan, Australia, Columbia, Brazil and Venezuela, drought in Canada, and parts of Brazil excessive cold in Europe. 80 countries have already reported a food deficit and the global price index for basic agricultural and livestock products is currently at its highest point ever since the index was introduced twenty years ago.

Robert Zoellick, the President of the World Bank, has already warned that the current crisis will be worse than that in 2007-2008. After all, in Mexico, some foodstuffs tripled in price between September and November 2010.

Those affected are urban residents and small farmers who do not produce enough to meet all their needs; many among these populations spend up to 75% of their income on buying food. The FAO recommends a pragmatic and flexible approach adapted and tailored to local conditions. In 2007-2008, supply problems meant in practical terms that the response to higher prices in developing countries was not effective.