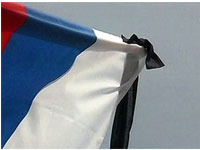 One can often hear many saying that people have become absolutely indifferent to one another in the modern world, that man is a wolf to a man. In Russia, most people say that Muscovites are especially callous, that they do not even know the names of their neighbors. The tragedy, which shocked the country and the whole world on Monday, showed that the situation is not that bad. People can still love each other, and these are not just words.

Perhaps, it is true that Muscovites and others living in large cities do not know the names of their neighbors. They may often fight in public transport and do not like it much when their distant relatives come to visit them unexpectedly. However, the explosion at Domodedovo airport showed that people still care about others. It is not just about sorrowful sighs in the kitchen - it is about real action.

Soon after the terrorist attack, Russian news agencies reported that taxi drivers working near the airport raised their tariffs from 1,000 to 20,000 rubles (from $35 to $600) for a ride from the airport to the nearest metro station. This information has found no confirmation and was later denied.

That is not the most important thing. Many people decided to drive to the airport after the blast to offer their help to those in need free of charge.

Many Internet users started posting their phone numbers on forums and in social networks so that others, who needed their help, could call them. One could see lines of people standing at the airport and holding "Free ride" signs. Many exchanged street addresses of donor blood stations.

"It is very hard to stay at home and watch news reports on TV when you realize that you can really help others. Me and my wife work as psychotherapists, we work a lot with those suffering from shock traumas, and we are ready to help people for free. We are ready to provide free psychological help to victims and eyewitnesses of the terrorist act at the airport," a man wrote on his blog.

This is just an example, not the only case. Unfortunately, we are living in the troubled time, in a restless country. An act of terrorism is not something that happens here every day, but they already occur regularly, in combination with natural disasters and man-made catastrophes.

During massive forest fires, which swept across the country in the summer of 2010, many volunteers rushed to help local residents. Those, who could not do it, they donated money, food and clothes to victims.

When smog engulfed the Russian capital, many companies allowed other people enter their air conditioned buildings and even let people sleep there at night.

During the Moscow blackout of 2005, when 52 of 170 metro stations were paralyzed, many drivers volunteers to give people rides to their homes free of charge.

It's a pity, of course, that human best qualities are manifested through tragedies. It's a pity that it does not happen every day. Nevertheless, it is comforting that people are willing to unite not just for their own profit - they unite to help others.
Russia mourns victims of Domodedovo explosion on January 26. May their souls rest in peace.