UK was about to have royal restroom instead of wedding 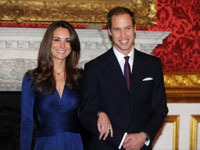 Organizers of the Royal Wedding for Prince William and his fiancee Catherine Middleton have found themselves in an awkward situation. According to the English tradition, all official documents and souvenirs are supposed to bear the initials of the newlyweds. In this particular case the initials are WC - William and Catherine. This is a highly inappropriate abbreviation for the royal wedding because it literally means the royal restroom. Russians may also have such a situation, if the names of the newlyweds would, for instance, be Mikhail and Zhanna. In Russia, public toilets are designated as M/Zh, which translates into English as Men/Women (Muzhchiny/Zhenshiny).

"When the collection was being designed they immediately noticed the problem," an insider told The Mirror. "If they followed tradition with the man's name first, as in the case of Charles and Diana, it would be an embarrassing royal flush."

It seems that such an outstanding historical persona as Sir Winston Churchill, who had the same initials, was not really concerned about the situation. The British could make countless jokes about their politician, but the majority of Britons utterly respect their prime minister even if they call him Sir WC. One shall assume that one has to be Churchill, or a person with a highly respectable reputation to eliminate any type of humiliation in their initials. At the end of the day, WC stands for the World Cup.

Prince William and Catherine Middleton have not earned such a reputation yet. By some quirk of fate, they became media personas, but that seems to be their only achievement so far. Therefore, their own initials do not suit them, taking into consideration the fact that toilet humor is extremely popular in the UK. It is pretty scary to imagine a British citizen exclaiming "Shit!" when he or she is taking a look at a souvenir with the wedding monogram.

King Edward III of England once picked up the garter that slipped from the leg of the Countess of Salisbury while she was dancing with the King at Eltham Palace. The King picked up the garter and tied it to his leg exclaiming: "Honni soit qui mal y pense" ("Shame on him who thinks ill of it"). No one publicly laughed at the monarch. Quite on the contrary, the King's French words became the motto of the Order of the Garter.

Nowadays, people's attitude to monarchy has changed considerably in Britain, especially after a series of scandals that shattered the Buckingham Palace and shocked the whole nation.

The solution to the problem of the royal wedding monogram was found quickly. The Royal Collection said Middleton would instead become the royal bride to have her initial appear before the groom's on the merchandise, including commemorative china. The final design features a silver C above and intertwined with a gold W. The wedding will take place on April 29.

As they say in Russia, "people will eat that up." However, even if they flipped the letters, there is a tradition to have the man's name first. It just so happens that Kate, 29, the daughter of a flight attendant and a flight dispatcher, will become the first royal bride to have her initial above that of the Prince! It does not really matter here that the attendant and the dispatcher earned a multi-million fortune. This is a very confusing situation indeed.

Similar difficulties appeared during the production of wedding souvenirs for Prince William's parents - Prince Charles and Lady Diana. Their wedding was all about compact disks - CD.