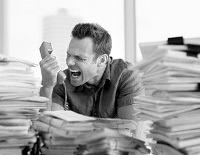 Where does the evil live? A priest will say it lives in a human soul if people let it take possession of their hearts. Politicians will say it lives in the system that pushed a person towards a crime. Neuroscientists seek the cause in the biochemistry of the brain. Do natural born killers exist or is this a myth?

On January 8 another outbreak of human aggression took place in the US which resulted in mass casualties. Unfortunately, this is not the first or the last time it happened.

On January 12 the parents of young American Jared Loughner who four days earlier opened a fire in the city of Tucson, Arizona and killed six people, asked forgiveness from the relatives of six dead and 13 wounded. Congresswoman Gabrielle Giffords who was seriously wounded by Loughner in the head is stabilizing.

Neuroscientists have gained knowledge about the biological basis of human aggression. How can we help morally and mentally healthy people who experience outbreaks of hostility caused by chronic stress and fatigue normalize their behavior?

Human aggression is a physical action, triggered by hostile emotions: anger, indignation, contempt. However, all these are normal emotions, as necessary as joy and love. After all, only the ability to be angry and indignant makes an individual capable of despising immunity to evil and allows fighting it.

For a long time there was a dominant belief that aggression occurs in humans against their will and was innately predetermined.

However, it turned out that aggressiveness, in contrast to drinking, eating or sexual behavior, does not have an independent foundation in the homeostasis (the so-called physiological mechanisms that support the constancy of internal environment).

On the nature of human evil

While there is no fatal predisposition for aggression in mentally healthy people, there are some biological factors that do suggest such predisposition.

Scientists in the U.S., Japan, and Europe have been comparing several hundred pairs for nearly forty years: brothers, identical twins with identical genes; and fraternal twins.

The latter are genetically different organisms, yet have greater biological community than non-twin brothers. The number of cases of aggressiveness in twins is higher than in brothers. The most noticeable difference is evident between fraternal and identical twins. In 25% of cases both fraternal twins are criminals. In identical twins this is the case in 63% of all instances.

It turns out that human maliciousness, albeit in a very small degree, is rooted not in bad social conditions, but in the biology of our brain.

In the last century there was certain knowledge that indicated failure of which parts of the genetic apparatus may cause predisposition to violent misdemeanors.

We are talking about human sex chromosomes.

Back in the middle of the last century it was found that the concentration of male sex hormone testosterone in the blood plasma of aggressive criminals tend to be higher than that of non-aggressive criminals, while in leaders of criminal groups it is higher than in ordinary prisoners. The observation of female inmates testified that they frequently commit offenses of aggressive nature in the moments of the menstrual cycle when there was a decline of progesterone, female hormone, in their blood. Close patterns were noticed among athletes as well. Yet, when particularly aggressive criminals were pumped with female hormones, or were subjected to castration, it did not help. Released from prison, castrated criminals committed more crimes paying revenge to the society that has mutilated them.

We can state that under certain conditions sex hormones affect a person's ability to be angry, irritated, and indignant. This is reflected in aggressive tendencies. Yet, no hormones can make a normal person break the law.
It is worth mentioning another unsuccessful attempt to fix villains through medical methods. The United States tried to achieve this goal by separating the frontal cortex from the rest of the brain. Frontal cortex acts like a conductor in the brain, bringing together the work of different brain structures in order to achieve behavioral goals. Medics made holes in the temporal bone of ardent criminals and cut brain tissue with simple tools, separating the frontal lobe from the rest of the brain.

Most of those operated turned out to be people with profoundly crippled consciousness. They lost the ability to live outside a mental institution. One gunman released by doctors killed someone again. He shot himself afterwards, and in a hastily penned note he bequeathed his brain to the surgeon who operated on him.
The reason for this "hormonal" failure is that the aggressive acts are created by a large ensemble of neurons settled throughout the brain that re-unite each time to achieve a behavioral result. Yet, there is no center of aggression or some key neurochemical substance or hormone that controls this state.