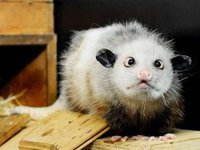 In order to earn the world fame, one can learn to dance, play an instrument or run fast. However, there are celebrities who did not need talent, unearthly beauty or punchy character to get famous. Animals and marine creatures have become favorites of millions solely because of their personal charm.

The new star of the internet is not some leggy starlet caught on film nude but a possum named Heidi. The blonde female from a zoo in Leipzig has an army of fans thanks to her idiosyncrasy that could cause a complex in humans. Heidi is cross-eyed, which gives her muzzle an absolutely charming look.

The cross-eyed creature is an immigrant in Germany. Heidi and her sister Naira were brought to Leipzig from the American state of North Carolina, where the sisters have not taken root for some reason. Once in the German zoo, the opossum has become famous around the world. Over a hundred of thousands of users visit Heidi's page on Facebook, and this number is constantly growing.

Heidi's crossed eyes generate so much interest that the Zoo dedicated a special section on its website to answer the questions about her eyes, and veterinarians patiently explain that there could be several reasons to it.

"This is probably a hereditary defect - de-synchronization of eye muscles. But do not worry, it does not hurt her," vet Stefan Kraay told Russia's NTV channel. There is also a theory that the reason is obesity because Americans supposedly overfed the animal.

The audience is yet to see the new star live. An exhibition of exotic fauna will be held in summer. The zoo does not plan to "actively market" its pet. Meanwhile, according to some reports, a German firm has already started the production of a plush toy of cross-eyed Heidi.

For unclear reasons, Germany is nearly the main "supplier" of famous animals, for instance, polar bear named Knut and the late Paul the octopus.

Knut has become everyone's favorite largely due to the fact that prior to his birth polar bears have not been born in Berlin Zoo for nearly 30 years. Further melodramatic story only added to the popularity of the bear. Immediately after his birth, Knut's mother rejected him and his brother.

His brother died four days later, and Knut was to be put to sleep according to the rules. However, a zoo worker Thomas Dörflein took the bear under his wing and nurtured the newborn from a baby bottle.

Incidentally, this act has caused a backlash among many animal rights activists. They claimed that the mother refused Knut not without reason, and there was something wrong with the bear, and humans should not interfere with natural selection.

The brouhaha that arose around the bear has attracted many visitors to the zoo who could not but fall in love with the polar bear. Of course, the zoo made some good money on this popularity. Knut has become a name brand that sells various souvenirs, a documentary was filmed about his life, and a book was published.

Hardly anyone can argue that the most famous German this summer was Paul the octopus from the Center of Marine Life in Oberhausen. It was sports that helped to attract attention to the octopus, namely soccer: Paul predicted the results of some matches at the World Championships and has never made a mistake.

The harsh accuracy of his predictions made octopus the enemy of many fans around the world who threatened to eat the oracle, but Paul died of natural causes on October 26 of last year. The octopus is still surrounded by numerous myths. No one knows exactly where and when the forecaster was born and how he managed to guess the outcome of the games with such accuracy.

Soon after the death of the octopus, Chinese director Xiao Jiang said that he will release a film called "Kill Paul the Octopus." The author of the movie is going to tell the world about strange matches that, according to the Chinese, took place in the last FIFA World Cup. The filmmaker is convinced that Paul had died two days before the FIFA World Cup finals, but the Germans have hidden this information.