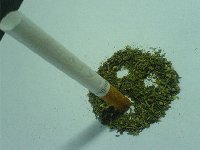 It seems that social anti-smoking campaigns have achieved an opposite effect. Many Americans teenagers quit smoking cigarettes and turn to smoking marijuana, polls show. Alcohol loses its positions: it finds popularity with 23 percent of respondents.

The statistics frightens specialists. About 6.1 percent of adults smoke marijuana nowadays, whereas the number was smaller in 2009 - 5.2 percent. Marijuana grows in popularity among college students (3.3 percent vs. 2.8 percent in 2009) and 8th graders (1.2 vs. 1 percent in 2009). As for 12th graders, every fifth one of them (21 percent) said that they smoked pot during the recent month, whereas cigarettes are popular with 19 percent of them.

Like cigarettes, alcohol loses popularity with American teenagers. Twenty-three percent of the polled students said that they liked drinking alcohol - it became the lowest index since 1975.

Common people do not seem to be concerned about the situation. Some people even say that smoking marijuana is better than smoking cigarettes, because marijuana does not carry such a large risk of lung cancer. They also say that it would be good for the government to legalize marijuana because cigarettes do not bring as much taxes to the budget as marijuana does.

The adversaries of legal medical marijuana believe that such measures backfired on the government. Over 46,000 students at 396 state-run schools are considered to be drug addicts.

According to Dr. Nora D. Volkow, Director of the National Institute on Drug Abuse, action must be taken to protect teenagers from the risks inherent in marijuana use at a young age. "These high rates of marijuana use during the teen and pre-teen years, when the brain continues to develop, place our young people at particular risk," she said.

Nevertheless, 14 American states have already legalized the use of marijuana for medical purposes. Most recently, such laws were approved in Arizona and New Jersey. The senators of the latter went further and gave federal officials a month to elaborate a new strategy to realize the new state-run marijuana program. The senators rejected propositions from NJ governor as too strict and illegal. For example, senator Nicholas Scutari stated that one should not deprive patients of marijuana if it had been prescribed for them.

In his deal with the senators, NJ Governor Chris Christie agreed to allow six alternative treatment centers to both grow and distribute the medical marijuana. He had wanted only two growers and four distribution centers. He also said that terminally ill patients would not need to prove they've exhausted other treatments before being allowed marijuana, The Associated Press reports.

Both concessions from the governor brought his proposed regulations more in line with the law to allow medical marijuana - but he didn't give in on other provisions that advocates don't like.

The battle for medical marijuana continues, and patients are caught in the middle.