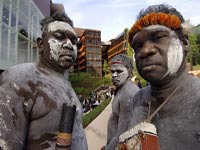 Australian authorities managed to solve the problem of the indigenous inhabitants of the country. As stated by the official Canberra, the fact that an indigenous Australian Ken Vuat has become a member of parliament in 2010 for the first time ever is another evidence to it.

At the time of the arrival of Europeans to Australia (1788) the number of natives amounted to 700 thousand people (over 500 different tribes speaking over 200 languages). By 1921 there were only 60 thousand indigenous people left. At first they were not even regarded as human beings. Colonization was accompanied by a deliberate extermination of the Aboriginal people and their displacement to environmentally adverse desert areas. The situation was exacerbated by the imported epidemics and alcohol.

Yet, the white population got their payback in the form of increased crime rate among the remaining Aboriginal people who in every way tried to harm the farmers who have seized their lands.

Today the situation has markedly changed. The important factor is the increasing desire of the government and public organizations to assist indigenous peoples. In turn, the number of Aboriginal Australians is rapidly growing: for example, in 2001 there were already 437,000 indigenous people.

The authorities started taking measures for their defense only at the end of the 19th century. In particular, the reservations protected by the authorities were created, and after World War II the government began providing them with financial and medical assistance.

Last but not least the issue of the Aboriginal people was paid attention to due to their voluntary participation in World Wars One and Two. Then hundreds of Aborigines heroically fought in the special forces of the Australian Army. Their heroic deeds made the white Australians develop a genuine feeling of respect for them.

Around the same time, indigenous people began fighting for their own rights. In 1930 they first petitioned the Supreme Court of the United Kingdom. As it turned out, their complaints often had real grounds. For instance, it was found that in 1934 the Aboriginal people were charged with the murders committed by white people.

In 1938 they held their first protest action dedicated to the 150th anniversary of the arrival of the British sailors in Australia. However, the key achievements in the fight for their rights were made much later, in the 1960s. In 1962 they obtained the right to vote, in 1966 they started protesting against the fact that their wages were lower than those of the white people, in 1967 they obtained the right to choose their representatives to the government.

In 1967 a national referendum approved the law that granted Aboriginal people the right to obtain Australian citizenship. The late 1960s were marked with the beginning of the movement for the revival of the cultural identity and providing legal rights to land. Today, the laws in many states provide land reservations for the collective ownership of Aboriginal people under the self-government, and also provide for the protection of their cultural heritage.

Aborigines believe 1985 to be the key date of the recognition of their rights, when the government gave them back the rock of Uluru in the Outback desert. For many of them it is more than just a sacred place, which, according to their beliefs, is the door between the world of humans and spirits.

In 1989, Indigenous Australians were granted the right to self-govern. In 1992, the High Court of Australia recognized the illegality of the persecution of Aborigines from the so-called "no-man's-land." This name was used by visitors to capture the land. If the land was not used in classic form, it was considered no man's land that could be seized.

Particularly unpleasant for the Australians is the reminder of the sad fate of the Tasmanians. It is no accident that local officials sometimes act as an engine for providing additional rights to Aboriginal.

On August 13, 1997, Tasmanian Parliament adopted the Statement of apology and repented before the natives for its former policy of removing children from their families. The authorities and missionaries used to place them in special children's homes for re-education. This practice was used until 1972.

In 2005 the government adopted a new Tasmanian Aboriginal Lands Act, which allows electing the Council of Aboriginal lands. However, there was virtually no one to elect. This right could be exercised only by children from mixed marriages, since the last indigenous Tasmanians died or were killed off by the end of the 19th century.

In November of 2006, Tasmania was the first Australian state to receive compensation for "Stolen Generations." However, fewer than 40 Aboriginal children were able to accept the money, each of them receiving an average of 100 thousand U.S. dollars.

Following in the footsteps of the Tasmanian Government, in 1999 the Australian Parliament repented for the ill-treatment of indigenous Australians, calling it "the most flawed chapter in the national history." A year later, in 2001, the government held a ceremony of reconciliation with the Aboriginal people in Canberra.

In 2006, with participation of the Australian Government, a high-profile film Ten Canoes was released. The film was dedicated to the Aboriginal life and marked by a special award at the Cannes festival. In 2007, the television of the Australian Aborigines emerged in the country, which allows learning languages of Aboriginal people via televised classes.

A year later, on February 13, 2008, Prime Minister Kevin Rudd released an official apology to the stolen generations on behalf of the Australian Government.

Now, after Ken Vuat became the first Aboriginal member of the House of Representatives, many in Canberra are convinced that the Aboriginal issue has been solved. Yet, is this really the case?

It is good that many Australians began to at least understand the indigenous inhabitants of the Green continent. They, admittedly, have taught the white Australians to live in harmony with nature and love it. The study of the Aboriginal life allows modern man to learn the art of survival, live in the places where it is seemingly impossible to live, get water in the places where it does not seem to exist, and find food in the circumstances where survival seems impossible.

This partly explains the fact that these children of nature had strived to progress. All they needed for life has been invented by their ancestors long time ago. Spears and boomerangs, in fact, are the main and only technical inventions of the Aboriginal people.

Now authorities build special housing in places where Aboriginal live, they send there extra police forces and medical personnel, cajoled Aboriginal with money. Despite that, the income level of the natives is 40 percent lower than that of the white Australians, many of whom still believe that the natives could not even dream of what they have now.

A clear proof that the Australian authorities managed to change the lives of Aboriginal people for the better, are the examples of successful native people known throughout the world. Among them is the painter Albert Namatzhira, writer David Yunaypona, footballer David Virrpanda, TV presenter Ernie Dingo, actor David Gulpilila, and singer Jessica Moboy.

Meanwhile, as experts concerned with the issue of the Australian Aborigines sadly testify, most of them do not want to integrate into the white society and do not wish to accept the new slogan: "The only religion of the white man is work."

There is also another question: who will return the lost culture to the Indigenous Australians? These days it is rare to find among them those who engage in the traditional ways of life (hunting, fishing, gathering and manual farming) and observe the traditional religious rites. Christian missionaries have tried hard to turn them into Protestantism and Catholicism, and deprive them of their native language.