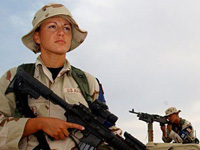 "In the time of Xerxes, it is documented that the King took advice from his Queen which significantly impacted a political issue and prevented mass genocide. We are still in Persia. Conversations still go on between men and women behind closed doors. To understand those conversations and more importantly how we may be able to influence them we must be able to access the females. Female Engagement Teams [FET] is a proven concept...The Marines do this well...To garner the full benefit of FET throughout the country, comprehensive ISAF guidance needs to be issued for Female Engagement Teams." Combined Joint Intelligence Operations Center-Afghanistan-Strategic Intelligence Update, 23 February 2010. Briefing titled Recommended ISAF Guidance for Female Engagement Teams. Quote from slide number 13, notes."

It is not every day that a US commanding general like Stanley McChrystal (USA, Ret.) signs a directive (dated 31 May 2010, Engagement With Afghan Females Directive) that is based in some measure on the story of Persian King Xerxes and Queen Esther. Who knew that the story would be used to support FET's, another 21st Century US Army COIN initiative to extract information from the population in Afghanistan? FET's target is the 50 percent of the Afghan population that is female.

And who knew that "We are still in Persia?" Perhaps the metaphor should be this: The USA is becoming like the Persian Empire and is destined for an ending that befalls all empires.

The Book of Esther tells a wonderful yet completely fictitious story of Xerxes' Jewish Queen Esther who ultimately saved the Persian Empire's Jewish community from extermination/genocide. In the fable, King Xerxes wife even managed to convince him to allow the Jewish community within the Persian Empire a two day window in which to take revenge against its enemies in any manner it sought fit. The story as "a historical record must be definitely rejected" according to the Jewish Encyclopedia.

So let's cut the FET's authors/briefers some slack and look to Xerxes' "real" Queen Amastris. Would she have been the type of person who "behind closed doors" could convince King Xerxes to spare a hounded segment of his empire? Herodotus-not exactly objective in these matters-- claimed that "Amastris was cruel and vindictive. On one occasion she sacrificed fourteen youths of the noblest Persian families to the god said to dwell beneath the earth. The tale of her horrible mutilation of the wife of Masistes [cut her breasts off among other body parts] gives us a lively picture of the intrigues and cruelties of a Persian harem."

Hey! This is the USA! We destroy history by night and recreate it by day.

According to the authors of the briefing, men, women and children are part of the triangle of knowledge that must be targeted for information collection. "In Afghanistan, we observe rather consistent themes: Men interpret information and tell you what they think you want to hear. Women see and hear what goes on behind the walls. Children run free in the community-they see, watch and are involved in nearly every activity in the community."

The briefing's authors note that children are to be targeted but with care. That high care quotient is rather odd given that Afghan children/teenagers have to navigate cluster munitions, landmines, ordnance from air and land, and hostile occupants and locals. FET's (and PRT's, HTT's, HET's) would seem to be the least of their problems.

"Children are a delicate engagement endeavor as we do not want to put them at risk. However, approximately 45 percent of the population is under age 16, impressionable and vulnerable and a prime target for enemy force recruitment. The future of Afghanistan rests with children. If we don't engage then the enemy will so they will need to be considered in our human terrain targeting construct." FET's proponents even support using Afghan adolescent male's attempts to impress/court females as a tool to extract information. In short, any and every activity is in-bounds for information exploitation.

Just like the ISAF Guidance presentation referenced above, a similar briefing from HTS describing/selling FET's was prepared by Dr. LisaRe Brooks and is dated 28 October 2010. Dr. Brooks is an HTS member located at Bagram Air Base in Afghanistan. She offers the rationale-minus Queen Esther's support-for the FET's effort.

"Female engagements are an integral component of COIN by embracing and understanding the missing 50% of the population; building relationships with the Afghan women to earn their trust, give women confidence in GIRoA (Afghan government] and divide them from those that violate their constitutional rights; and empower them to have a voice and ownership in solutions for problems in their families, villages, country. The desired end states are these: women influence families/ communities not to support the Taliban; women influence others (women) to demand basic services from the local government (with coalition force support); women influence family and community members to support GIRoA; and women do not support/ enable the insurgency."

Females need to be involved in global COIN, in Afghanistan, in Iraq (The Lioness Program for example) and anywhere else males are a few cans shy of a six pack when it comes to treating females and minorities like equivalent human beings. In fact, women or anyone else qualified for tooth or tail US government operations-military, intelligence, stability, diplomatic-should be in decision making or frontline positions. If the premise is "All of Government, All of Society" in the ongoing American War Effort against terror, drugs and crime-and protection of the US Homeland-- then every American is needed in the cause (including 16 year olds).

Further, females are essential to the success of any COIN/collective intelligence gathering operation as is suggested by some commentary/observations in the two FET's briefings mentioned in this article. Social sensitivity is a big part of the reason. In October 2010, "A new study co-authored by Carnegie Mellon University, MIT and Union College researchers documented the existence of collective intelligence among groups of people who cooperate well, showing that such intelligence extends beyond the cognitive abilities of the groups' individual members, and that the tendency to cooperate effectively is linked to the number of women in a group." It makes perfect sense.

What makes no sense, however, is the US Army's rush to field an inconsistently trained FET's capability. Given its deadly experience with its own Human Terrain System--in which recruiting, training and management crippled the initial concept-it seems ludicrous to put FET's on the fast track.

Indeed, in a 7 December 2010 teleconference interview with Colonel Chadwick Clark of the COIN Training Center in Afghanistan and Colonel Sheila Scanlon, Advisor to the Afghanistan Minister of the Interior had some choice responses for their questioners. They took pains to stress that FET's was all volunteer and that other countries operate FET's in Afghanistan. Training was a focus area of the interview:

Currently, according to statements in the December 2010 interview, there are a total of 40 female engagement teams in Afghanistan with a minimum of two females per team. "So there are at least 80 trained females in the country right now, but 40 teams employed in each one of the regional commands. There are 17 in Regional Command Southwest, 5 in the South, 11 in the East, 6 in the North and 1 in the West." A map of the FET's locations is contained in Dr. Brooks briefing referenced above.

John Stanton is a Virginia based writer specializing in national security and political matters. Reach him at [email protected] If you would like copies of the briefings mentioned in this piece, send a request.