Children replace their own parents with computers 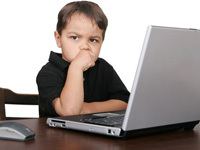 Educational computer games for children develop important skills - diligence, ingenuity and attention. Yet, psychologists warn: overindulgence can lead to an eventual decline of the ability to fantasize and difficulties with analyzing and synthesizing information.

Children are bored. Parents are too busy. Our life is too complicated and confusing for children, as a result they confide in their "iron friend," the computer. It is almost impossible to eliminate it from the modern life.

And it is not necessary. Yet, if adults make their choice consciously, children have become a "digital generation" beyond our control. Children like playing with the computer because computers never get tired or offended. Therein lies the greatest danger to the psyche: children soon begin to associate the computer with a friend. Here is the expert advice of the Research Institutes of Hygiene and Health of Children and Adolescents NTSZD RAMS:

Psychologists, psychiatrists and sociologists around the world explore the problem of computer addiction particularly closely as the main risk group is teenagers.

It is in the virtual world where teenagers acquire their own space. That virtual world can ignore the real-world problems with learning difficulties, lack of understanding from parents, and poor physical shape. Teens get their own space that no one else can access. There are no responsibilities, but the anonymity allows combining imaginary and real qualities in a virtual image. They can make their own decisions without fearing the consequences, because any mistake is easily corrected.

Under the influence of such "opportunities" the reality is distorted. As a consequence, teenagers develop dangerous qualities: emotional coldness, isolation, psychological infantilism (inability and unwillingness to take responsibility and control their actions).

Compulsive Web surfing: an endless trip to the World Wide Web searching for information. Addiction to the virtual communication and virtual dating: large volumes of correspondence, continued participation in chat rooms, web forums, excessive number of friends and acquaintances in the network. Compulsive gambling: an obsessive fascination with computer games on the network. Online gaming, unnecessary purchases from online stores, and constant participation in online auctions.

How to recognize when your child has become an Internet addict

American scientists 14 years ago released a list of signs that make it possible to distinguish a "user" from an "addict:"

Hiding Internet habits from others

Nervousness, anxiety and depression occurring in the absence of Internet access.

Using the Internet to escape from problems and bad mood.

How not to let children become addicted to the Internet

Most importantly - do not blame the child, because it will only exacerbate the conflict. Immediately set a limit to the activities on the computer and try to stick with it. Do not offer your child to "play" on your computer, offer new knowledge and skills (e.g.," let's learn to count). This way your child will treat the computer as a tool for gaining certain knowledge.

The rules should be flexible and there should not be too much of them. Parental requirements must not conflict with the vital needs of the child (motion, knowledge, communicating, and games). The rules should be agreed between all adult family members. The tone of the ban should be explanatory and friendly, and not forced. First of all parents will have to use the computer less themselves and spend more time with their children. For many parents the need to communicate with their own children has long been a burden. Praise them for any, albeit insignificant "achievements." Help your teenager to gain confidence in the real rather than virtual world.