U.S. secrets that tarnish its image before the world 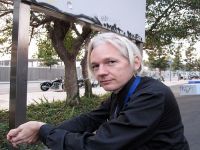 The United States had secrets revealed that tarnish its image before the world, which should speak to it to kneel and make their 'mea culpa'

The most sacred social mission is the act of keeping people informed about what is happening around them in the public and secret acts of the system in power, what, on their behalf, is being done by those who govern.

Even more than having the right to inform, the journalist has a civic, social and inalienable duty to tell people what their government does, openly or secretly, on their behalf.

An act performed in the function of the representative of a people and kept secret, at worst, I suspect, may be criminal if it is insisted that it be kept secret.

The brave and bold Australian journalist, Julian Assange, and his virtual site WikiLeaks, shattered the false moralistic structure of world diplomacy, notably that of the moralizing, preaching United States of America, washed the souls of all peoples around the world, left the self-proclaimed owners of the truth with their pants down, and showed that embassies and diplomatic missions are actually dens of international espionage.

Instead of trying to apologize before world public opinion for the practice of diplomatic espionage, kneeling down and doing their 'mea culpa,' the United States, as if wanting to own the absolute truth, tries, at all costs, spending its energies with accusations, prosecutors and with getting the governments of countries around the world to cooperate in their campaign of vengence.

The Department of Justice of the United States is exploring the 'legal' roads to prosecute Julian Assange, said Vice President Joe Biden, who considers the founder of WikiLeaks a "high-tech terrorist."

"We are studying it. The Justice Department is working on the question. If he conspired with a soldier of the United States military to get these secret documents, this is fundamentally different than if someone leaves documents for you, let's say you're a journalist, here is confidential material,'" Biden said to a NBC TV.

The Espionage Act of 1917 does not contemplate this type of case, since you need to demonstrate that the site WikiLeaks, which released thousands of secret diplomatic telegrams from the United States, is not a traditional means of communication.

U.S. prosecutors hope to gather evidence that the founder of WikiLeaks, Julian Assange, encouraged or helped the soldier, Bradley Manning, who was suspected of having passed documents to the site.

To accuse Julian Assange of conspiring to undermine national security would allow the U.S. government to get the Australian in prison without affecting freedom of expression of the media guaranteed by the Constitution.

"This man did things that harmed us, put in danger the life and career of certain people in the world. It complicated relations with our allies and friends," explained the vice president of the United States, Joe Biden.

Will an arrogant nation, claiming to be the absolute master of truth as the United States does, could they be capable of a gesture of humility and admit that they use worldwide diplomacy to spy on countries, institutions, governments and people around the world? Of course not!