Cemeteries of the future to be built vertically, in skyscrapers 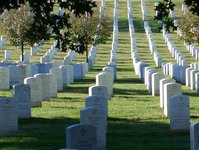 The population of the world constantly grows, which may eventually lead to the shortage of food, fresh water and other essential things. Moreover, it will be hard for people to pass away normally because cemeteries in the world will be "overcrowded" too. To solve this important problem, some offer to build special skyscrapers, in which cemeteries would be organized.

Large cities suffer from the lack of place for life and death most. Let's take India's Mumbai, for instance, with its 21-million-strong population (for comparison, the population in Moscow counts 15 million people), where each square kilometer is inhabited by 22,000 people. Building new cemeteries is an unaffordable luxury under such conditions. Architects offered a way to solve the problem by building vertical cemeteries in high-rise buildings. The project was called "Moksha Tower."

The Moksha Tower project takes traditional burial methods from four major religions in Mumbai and translates them into an urban context. The tower frees up a significant amount of ground space for the living and provides within it a place of rest for the departed. The tower seeks to meet the needs of the entire burial process for several cultures within the city and create a temporary place of repose in the sky. It also acts as a symbolic link between heaven and earth. For Muslims, it provides areas for funerals and space for garden burial; for Christians, areas for funerals and burial; for Hindus, facilities for cremation and a river to deposit a portion; for Parsis, a tower of silence is located on the roof of the tower.

The project also stipulates places for worship, prayer and meditation. The whole tower will be designed as a vertical resource to process and utilize dead bodies.

The idea can probably find support in the town of Roncadelle in Italy, whose mayor strongly forbade the locals from dying since there was no room in the town where the departed could be buried. It is allowed to die in Roncadelle under very serious circumstances only - for example, during an epidemic of a deadly disease, such as plague.

The owner of a local funeral company said that it was extremely hard to enlarge cemeteries in the town because there was not enough land for the purpose. If they continue to dig new graves, tombstones will appear near residential areas.

In spite of the fact that Russia takes one-sixth of dry land on the planet, the problem of the shortage of land in Russian regions is a very important one too, especially for Moscow. Former mayor Yuri Luzhkov put forward an idea to provide the land on cemeteries on loan - not just for a certain period, but for the time when someone visits the grave to take care of it.

"In foreign countries, the land is provided for 15 or 20 years. The contract can be prolonged for the period when a certain grave means something to somebody, when somebody takes care of it. If a grave is abandoned, this place is handed over to municipal authorities," Luzhkov once said.

Free places on Moscow cemeteries have already become a rarity too, even an expensive rarity. Nevertheless, there are countless graves which no one attends for years and even decades.