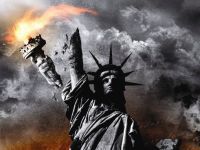 In the U.S., there are several laws that criminalize what they call "espionage" that are committed by what they call "insurgents." However, when U.S. intelligence agencies organize and finance the same in other countries, they are called "dissidents." Or is it "freedom fighters?"

Within these laws could be cited the Espionage Act, in force since 1917, according to the wishes of President Woodrow Wilson that restricted opportunities guaranteed in the First Amendment of the Constitution of the United States that any citizen may speak out against the country's entry in the First World War, a war that the president saw as vital to the interests of the nation. Today we would say that it was for national security.

Many citizens, including union leaders, educators, journalists, artists and academics protested against U.S. entry into that war. All of them were threatened and some were brought before courts for violating the Espionage Act, even though their only crime was exercising their rights from the First Amendment of the Constitution. Some of those arrested were given penalties of up to ten years in prison, where they were subjected to inhumane conditions and frequent beatings by other inmates and sometimes by their jailers. All this was done together with the necessary publicity for others to feel the terror and decide that they do not need not to be involved in these situations.

During the era of George W. Bush, with the creation of the Department of Homeland Security and certain functions assigned to it, they tried to revive the Espionage Act, but had limited success in these aims. Now under the Obama administration, recipient of the Nobel Peace Prize, again attempts are being made to rely on the outdated and unconstitutional legislation to try to apply to the case of Julian Assange (WikiLeaks) and also to terrorize those who in future may seek to imitate him.

In this case, the Obama administration is trying to ignore that the United States Constitution provides for freedom of the press, that very same freedom they have accused other countries of violating.

To make this dark maneuver, the State Department has proclaimed that they do not recognize Julian Assange as a journalist, but as a "political actor." (Which is dangerous for their own employees who act as "bloggers" or are themselves "independent journalists," they also could be considered "political actors").

Calling Assange a "political actor" was the bright idea of the Assistant Secretary of State, P.J. Crowley, by stating that the person had a "political purpose" behind his activities, which the U.S. government was considering incompatible with the activity of a journalist. (An interesting definition that leaves entirely without argument the bloggers and "independent journalists" that have been created by the U.S. and regularly receive instructions and the necessary funding to conduct their work for "political" purposes, not journalism).

The U.S. Constitution sets no term limit neither to "press freedom," or conditions to exercise the same in the capacity of journalist, and it has also not established who could qualify as such. The term "political actor" is a fabrication of the Obama administration to try to limit the rights of its citizens to exercise the established provisions in the amendments to the Constitution.

To the extent that the existing police state advances in the United States, freedoms will disappear.