Blood vengeance: Absurd paradox of the past 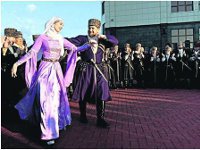 Blood vengeance, or vendetta, evokes different feelings with different people. Some see it as a cultural tradition, others believe that it is a custom that hangs over from the old days and needs to be eliminated. This is what the authorities of Chechnya decided to do. A special committee established in the republic managed to solve 170 conflicts in four months.

The committee to reconcile the families in a state of blood vengeance was established in Chechnya in August 2010 following the initiative from Chechen President Ramzan Kadyrov. The head of the republic urged all the feuding citizens to forgive each other on the threshold of the Holy Month of Ramadan.

Some of those conflicts continued for 50 years and more. Local skeptics say, though, that the campaign to end the feuds is not likely to be successful. Blood vengeance can occur not only because of a murder. A car accident can also be a reason, just as successfully.

However, violence begets more violence. The never-ending string of revenge-linked murders may lead to paradoxes, when people can not even name the reason why they are supposed to take revenge on someone, but they just continue to exterminate each other. Revenge does not ease anyone's life.

Blood vengeance was common for societies deprived of the origins of statesmanship. It seems that this type of revenge is supposed to disappear with the development and strengthening of the state. In the infancy of civilization, they tried to replace blood vengeance with ransom, but still, vendetta exists today. Why is that so?

There are theories that explain this custom with ethnic or religious origins of the problem. In Italy, for example, vendetta was prospering in the south of the country and in Corsica (France), where the Arab mentality was especially strong. Vendetta is also common with Muslim countries. It is generally believed that Christian countries extirpated blood vengeance earlier. The European code of noble honor, for example, excluded vendetta, but stipulated revenge to a personal offender. As experience shows, the religious prohibition on bloodshed does not work in history, and the countries with strong forms of statesmanship are not an exception.

Blood vengeance can be one of the fundamental strongholds of the society, not just a custom. This is a typical feature of the Chechen Republic. The Soviet power was trying to diminish the role of the Muslim clergy, but it only strengthened the significance of ancient customs and laws. Bolsheviks failed to destroy blood vengeance in the Caucasus, not matter how hard they tried.

According to Shariah laws, blood vengeance is a punishment for a private crime. Nearly all Muslim legal scholars claimed that it was more important to forgive murderers rather than punish them. Muslim holy book, Quran, allows 'eye for eye, tooth for tooth' vendetta only in cases of premeditated murder and bodily harm.