What purpose does NATO serve?

The aim of the new NATO strategic project is to ensure that current world power favors mainly the USA so that it maintains control of mineral and energy resources for their corporations... 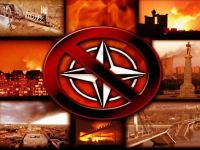 It is impossible to understand the changes in NATO just looking at the Lisbon agreements. We must denounce its strategy. Just as the empires of Spain, Portugal, Holland, England, France and Germany, the goal is to dominate or eliminate the people and seize every resource on the planet. What has changed are the cannon and the sword for the nuclear missile and the propaganda. Also the ability for extermination and terror.

NATO is the most powerful military organization ever. Its cornerstone is the United States and its engineer is the de facto power of Americans. U.S. military spending exceeds the sum of all other countries and their contribution to the Atlantic Alliance recently rose from 49% to 73%. Its warfare capability consists of thousands of nuclear weapons, offensive and defensive missiles, powerful conventional bombs, over 800 foreign bases, fleets in every ocean, cyber tools, radio broadcasting weapons and bombers permanently in flight. Behind that, the European bourgeoisie give their military and political support to the project.

US-NATO constitutes an expensive machine of destruction that was obviously not designed to fight al Qaeda, the Yemeni pirates or terrorist groups. Its task is the future of humanity, even if it is used in the present.

Large Western businessmen know that the present crisis in development will end at some point. The capitalist system, cautiously, will advance their absolute control of the plan to impose their next "benefit" to civilization.

With global warming and destruction of landscapes, chaotic migration of peoples, the depletion of oil and gas, the collapse of industry and transportation, the weakness of the financial system, lack of water, scarcity of minerals and lands for agriculture, forests, sea food, the increase in population in the billions, it will be impossible to have the capitalist order of free exploration of nature.

Faced with the impossibility of steady economic growth with finite resources and the consequent collapse of political, social and ideological forces, the owners of the multinationals prepare NATO as an instrument for their model of fascist global dictatorship, "one government, one army, one thought."

What can the Western transnational magnates do without water, minerals, energy and suitable climates? They will appropriate, with the force of arms, all the riches of the planet. They repeat now in an absolute way their own colonial histories.

There is a secret plan. NATO bigwigs say this openly. The Secretary General, Anders Fogh Rasmussen, said that his forces will act anywhere in the world to defend "our peace" and "prosperity"! In a previous official document they were speaking to defend their "way of life." Chomsky explains: "... The doctrine of Bill Clinton [former nominal head of NATO] was that the U.S. was authorized to use military force to ensure 'uninhibited access to key markets, energy supplies and strategic resources' without the need even to invent pretexts ... "

The key objective is the resources. A short time ago, the situation became tense when it was believed that China would block the export of some rare, essential metals which are essential for the electronics industry. Brazil will have six nuclear submarines to protect its oil and, by 2047, will incorporate 20 conventional submarines, since Washington's interest in the Amazon region is well known.

The cold will to use the force of the US-NATO was demonstrated in the destruction of Yugoslavia, Afghanistan, Iraq and the bombers in Pakistan. The obstacle is Russia and China. They have plans to attack Iran and the People's Republic of Korea. The construction of a missile shield that allows attacks to go unpunished. This threat is so serious that President Medvedev and the Russian bourgeoisie are opting to become clients of the empire, which would leave China alone.

The poor in each country are victims of the design of the Atlantic Alliance, which will use force to ensure its prosperity. The socialism of the future must know it, say it and stand in solidarity as a sustainable alternative for everyone.