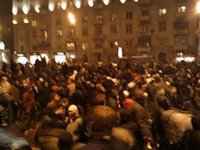 A crowd of Spartak football club conducted a massive protest action in Moscow, not far from a district Office of the Public Prosecutor on December 7. The fans blocked traffic on Moscow's busy Leningradsky Prospect (Leningrad Avenue). The fans conducted the action to demand a thorough investigation into the death of Yegor Sviridov, a 28-year-old fan of Spartak, who had been killed in a brawl with natives of the Caucasus in the north of the Russian capital.

The action did not last long. The police quickly took the situation under control and pushed the protesters away from the highway to the sidewalks. Eyewitnesses said that the police did not use violence against the fans.

Over 1,000 fans read the appeals on fan sites and gathered at about 7:00 p.m. MSK near the building of the investigation department of Golovinsky district Office of the Public Prosecutor on Leningradsky Prospekt, one of Moscow's busiest roads.

Afterwards, someone urged others to block the Leningradsky Prospekt to attract public attention to the incident. A man exploded a cracker, others lit fire torches, and the crowd started chanting nationalist slogans: "Moscow for Muscovites," "Russia for Russians." About 600 people blocked traffic on the road and were soon joined by others.

The fans started marching along the road, crushing kiosks and roads signs on their way, Interfax reports. The fans stopped the march as they approached Sokol metro station. Some time later, the police convinced the protesters to break up. According to eyewitnesses, there were no serious conflicts between the police officers and the football fans. News agencies said earlier that 20 people had been arrested, but officials of the Moscow Interior Department rejected the information.

The brawl, in which Yegor Sviridov died, took place on December 6 at night. Two groups of you men - over ten people, including natives of Dagestan, Kabardino-Balkaria and Chechnya, - took part in the fight. One of the men, a resident of the city of Nalchik, Aslan Cherkesov, fired his traumatic gun at Sviridov.

The fan suffered four gunshots: one in the head and three in the torso. The young man died on the scene. A friend of his, Dmitry Filatov, suffered severe injuries too: he was hospitalized to an intensive care unit.

Aslan Cherkesov, the prime suspect, was arrested, criminal proceedings were instituted. If found guilty, he may face a sentence of up to 15 years, Pravda.Ru says.

The victim, Yegor Sviridov, was known among fans as Sedoi (Gray-Haired). He was a member of Union association, which unites Spartak's most aggressive fans. Many Russian football fans actively discussed Sviridov's death on forums and blogs. They wrote that the men from the Caucasus were in the majority in the brawl, and it was them, not the Russians, who started the fight. Sviridov was standing at a bus stop in a company of his friends: they wanted to catch a cab to get home. The young people were laughing at the time with a group of men from the Caucasus was passing them by. The latter thought that the Russians were making fun of them, and the fight occurred.

Alexander Yefremov, a friend of the killed fan, said that other Russian men were beaten brutally in the fight. "They have their faces bruised all over," the young man said. According to Yefremov, the men from the Caucasus fought like wrestlers. Aslan Cherkesov, the prime suspect in the murder case, pulled out a gun as soon as the brawl started. Yefremov said that Yegor Sviridov died from a shot in the back of his head: the bullet smashed a half of his head.