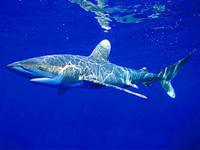 International specialists begin to arrive at Egypt's popular resort of Sharm el Sheikh in an attempt to explain why oceanic whitetip sharks, which rarely attack humans and do not approach shallow waters, have suddenly changed their behavior. A Swedish research vessel has already arrived in the area of the resort. The team of scientists on board the vessel will observe and study the behavior of marine predators.

For the time being, there have been several theories proposed to explain the unusual behavior of sharks. The most unusual one of them was voiced by South Sinai Governor Abdel Fadhil Shusha. According to the official, the appearance of killer sharks in the Red Sea was orchestrated by Israel's Mossad.

"What is being said about the Mossad throwing the deadly shark (in the sea) to hit tourism in Egypt is not out of the question, but it needs time to confirm," Shusha was quoted as saying by egynews.net state news site.

Another theory says that the sharks were attracted to the shore because Australian live sheep and cattle exporters are dumping carcasses overboard.

Badische Zeitung newspaper wrote that resort animators often took efforts to attract the sharks to the shore so that tourists could take pictures of them. As a result, the sharks started attacking tourists taking them for sheep.

Theory number three: tourists illegally feed sharks during boat trips to make them swim closer to the boats. In addition, Egyptian divers often attract the sharks when diving to impress their clients.

The last theory: the sharks are just hungry. Some experts say that the reason of the attacks is connected with a disruption in the ecosystem of the Red Sea because of overfishing.

The beaches of Sharm el Sheikh have been closed repeatedly. Many tourists refuse from their trips to the resort. Even Russian tourists, known for their likes of the extremes, prefer not to holiday in Sharm el Sheikh now. Many Russians have started to cancel their tours to the country because of the sharks.

A series of shark attacks has taken place in Egypt within only one week. One tourist died and four others were seriously injured as sharks attacked them in shallow waters. The first incident took place on November 30, when a shark injured a family couple. Two others were mauled by a shark on December 1: both of them lost their arms. Three of the injured tourists are Russians, the fourth one is a Ukrainian.