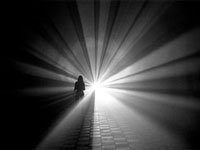 As a rule, people perceive near-death visions as a phenomenon that proves the existence of the nether world. Many of those people, who wake up from clinical death, say that they were traveling along a narrow dark tunnel with light shimmering at its end. Some people say that they were communicating with some luminous creature (whom they take for God) and their deceased relatives.

American scientists studied encephalograms of dying patients and discovered that the electric activity in their brains was intensifying as the moment of death was drawing near.

"We think the near-death experiences could be caused by a surge of electrical energy released as the brain runs out of oxygen," Lakhmir Chawla, an intensive care doctor at George Washington University said.

"As blood flow slows down and oxygen levels fall, the brain cells fire one last electrical impulse. It starts in one part of the brain and spreads in a cascade and this may give people vivid mental sensations," the doctor added.

What about the cases, when a person feels like leaving the body during the moment of death? Those who had such a near-death experience say that they were moving in the "astral body," going outside and even visiting their friends. Some people also said that in an astral state they could know the things which they never knew when living in a physical body. They knew where to find something that they were looking for, they could describe what some person was doing at one particular moment or what he or she was wearing during that moment, etc.

Scientists and parapsychologists conducted many studies in an attempt to find an explanation to the mysterious phenomenon. US researcher Charles Tart conducted a series of laboratory experiments at the end of the 1960s. Tart cast his patients into sleep while sensors were registering their eye movements, brain biocurrents, blood pressure and electric resistance of the skin. The scientist placed a cart with a five-digit number on the shelf above the patient's bed. In order to see the number on the card, a patient had to look at it from above. After the tests, several volunteers said that they were hovering in the room above their beds - they named the numbers on the cards correctly.

In Russia, the phenomenon of near-death experience was explored by psychiatrist Vladimir Raikov. He conducted his experiments with the participation of an extrasensory individual, who could voluntarily generate an "astral twin." The phantom could be visible, but it would only obey his master's orders. The psychic ordered his own "ghost" to move to the room next door. In that room, Raikov had another patient - a hypnotized trance. The other patient has never seen the psychic and did not know how he looked. However, when she was asked to describe the appearance of the "astral twin," the woman provided the detailed description of the psychic. In addition, Raikov asked the woman to jab the phantom with a needle: the "original" could feel the jabs every time they were made.

Professor Alexander Chernetsky also received interesting results in his research. Employees of his laboratory used a sensor to measure the electric tension during the research. The device showed reactions to the fields around biological objects. A sensitive (a human possessing extrasensory abilities) was building their own phantom with the power of mind. The sensor showed considerable changes taking place in the biological field of the person.

Swiss scientists have recently made a sensational discovery. The electrical stimulation of one of the zones of the human brain gives the out-of-body feeling to a person. A female patient, suffering from epilepsy, was subjected to electric stimulation of her brain, a angular gyrus in the right part of the brain, said that she could see herself falling down from a high altitude and then hovering above her own body.

It is not ruled out that people will develop the out-of-body technology some time in the future. At present moment, it is clear that the phenomenon is of the psychological nature and is closely connected with the activity of the human brain.